Whether describing hair, makeup or fashion, the ‘French-girl aesthetic’ is more popular than ever, but what exactly is it? We ask five French creatives — Caroline de Maigret, Camille Charrière, Joséphine de La Baume, Omaima Salem and Léna Situations — about the look
Originally published in
VOGUE 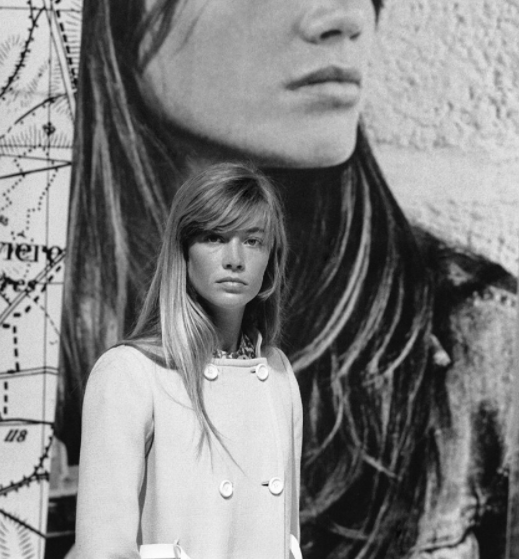 When it comes to hair and makeup, the term ‘French girl’ has been used a lot over the past 12 months. In fact, even in the past few weeks, countless ‘get the French-girl look’ articles have popped up on my newsfeed. But with each one referring to something slightly different — some to messy ‘just-woke-up-like-this’ hair, others to bobs or Françoise Hardy-style fringes, some to natural, less-is-more makeup, others to a red lip and cat-eye flicks — it’s impossible to grasp what exactly the term is referring to.

To complicate matters further, there seems to be some kind of contradiction at its core: an effortlessness that Clare Varga, head of beauty at WGSN, describes as “belying the fact that French girls do invest a lot of time, effort and money into their beauty”.

So, what exactly is the French-girl aesthetic and do French women really identify with it? Is it just another elusive, unquantifiable beauty ideal or is it a byword for inner confidence? To find out, we asked five French women — each celebrated for their unique approach to style — about what the term means to them.

What does French-girl beauty mean to you?
“Mostly natural and effortless, achieved with effort.”

Who epitomises the French-girl aesthetic to you?
“Hard to choose one. Let’s say the writer Simone de Beauvoir because beauty is 360 degrees.”

What would you say is the appeal of the French-girl look?

“It is seen as a form of nonchalance, and that freedom of being is probably what people find attractive.”

How would you describe your own approach to beauty?

“Natural and simple. I take good care of my skin because I think of it as 75 per cent of my makeup. I nourish it well and give it Kobido facial massages. I finish with light makeup: black mascara, eyeliner and cherry creamy blush on the cheeks.”

Is French-girl beauty something you engage with or reject?

“I don’t know, I just followed my elders. But at the end of the day, the fact that I don’t like to wear a lot of makeup, nor have my hair too ‘done’, is just because it fits me better — and maybe also because I am lazy beauty-wise.”

What does French-girl beauty mean to you?

“The French-girl aesthetic is supposed to be embodied by a white girl who doesn’t wear a lot of makeup. She has to have the perfect straight hair or something a bit wavy. She’s a natural beauty. But it’s not natural. No girl just wakes up and looks like this. And this is where I feel like the aesthetic is damaging, and can cause insecurities for many French girls who do not fit that image. In reality, you can be French and be non-white.”

Do you identify with the French-girl look?

“It’s complicated because I don’t have the French-girl hair type. I am from Algeria, but I’m French. Growing up, having curly hair was not on-trend. It has been my biggest complex and insecurity. I used to straighten it all the time, which is why it’s so damaged now.”

Where do you think the French-girl look has come from?

“It’s so weird because the first thing we learn at school is that royalty such as King Louis XIV and Marie Antoinette were beauty gurus who wore wigs and lots of makeup. What happened in between? The French-girl look is something that has been created by the movie industry, the advertisement industry and magazines, which has been ruled by men for a really long time. So we’re seeing women through a man’s eye. It is what men think of as beautiful.”

What does the French-girl aesthetic mean to you?

“I feel like the idea of the French-girl was crystallised around French New Wave cinema, around the actresses in those movies that became iconic. I don’t think the same archetype is as relevant today, especially as they were one type of woman and much more manicured. But their romanticism and moody attitude is probably still relevant. Beauty is more about the way you carry yourself really than one’s features.”

Who epitomises the look?

“No one in particular, there’s a lot of diversity and many types of beauty in France. But to give one of them, I loved [French actor] Jeanne Moreau growing up, she’s not a typical beauty. I love the way she carried herself; she was petite but acted like the tallest person in the room. She was such a strong woman, a bit of a tomboy, a real badass and an incredible actress.”

How does French-girl beauty play into your approach to beauty?

“I don’t think of it ever, but I’m aware it’s a thing. I probably do the opposite of what I should do, to be honest, as I’ve smoked, and I only quit a couple weeks ago. Let’s see how that goes, but I guess that’s quite French, too?”

How would you describe your approach to beauty?

“Pretty minimal. Although I have to admit that lockdown has made me more interested in using beauty products as a pick-me-up. I was always very proud to shy away from the English approach to makeup, which is more-is-more, instead going for the French approach, which is the natural look.

“Perhaps it’s because I’m older, I’ve become more confident and comfortable with my own femininity, or perhaps it’s because I’ve been living in England for 10 years, but I’m being more experimental with makeup now. I’m open to the idea that makeup can be used to transform yourself just for a night — I used to be obsessed with always looking the same, looking like myself, and now I’m having more fun with it, so I guess I’m becoming less French.”

Why are we so enamoured with the French-girl look?

“People love the nonchalance of the French-girl aesthetic. It’s the girl who looks like she’s just rolled out of bed and doesn’t care what people say about her. That is something that I really identify with, looking like I’m the one who has spent the least time in front of the mirror when I show up somewhere.”

How has the French-girl aesthetic informed your idea of beauty?

“In France, you’re made to feel guilty if you care too much about your appearance, so there’s a lot of shame attached to doing things differently. On the flip side, it’s so timeless — there’s something freeing about the aesthetic which is basically just ‘come as you are’. That’s a really positive message. I’m not the kind of girl who needs to put her makeup on to leave the house, even if I’m going to an important social gathering, and that’s something I’m quite happy about. Although I appreciate the power of makeup, I’m glad I’m not a slave to it.

“That said, I’m happy that I’m breaking free from those beauty standards that were imposed upon me growing up in France. I guess it’s about finding the balance and what works for you.”

What does French-girl beauty mean to you?

“French-girl beauty means trying to look natural and effortless, which doesn’t necessarily mean being effortless. There is a lot of effort behind this natural look and all French women know that, but don’t want it to show.”

Why are we so obsessed with the French-girl look?

“I really don’t know why people are obsessed with it. It might have something to do with the desire to be more natural, more confident, freer.”

What does beauty mean to you?

“Beauty is something that feels good to my eyes. Just like good music feels good to my ears. To me lately, beauty in people has been about attitudes, movements and little insignificant details I notice; the way people frown, raise their eyes, smile, laugh.”