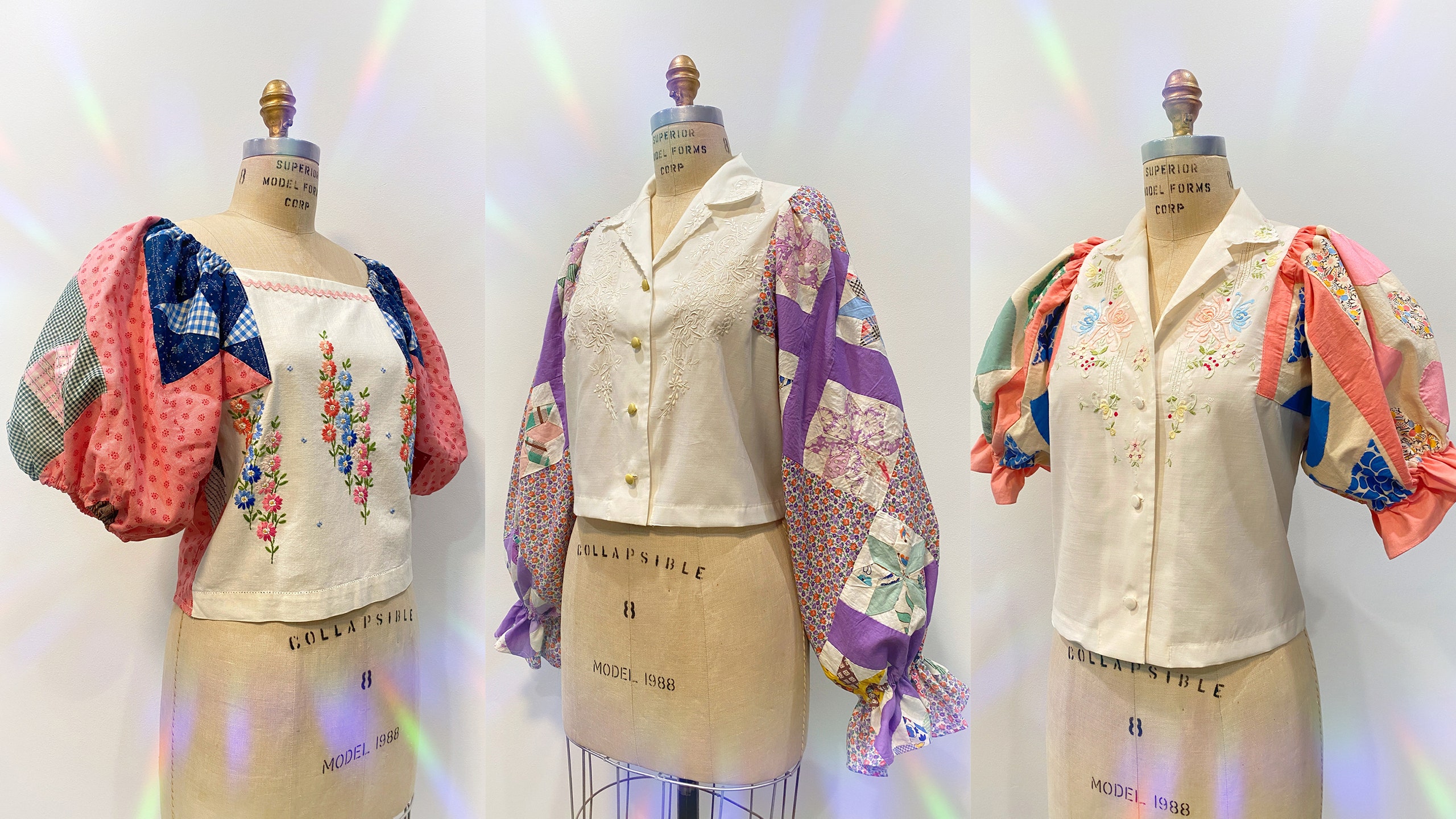 Designer Selina Sanders’s upcycled fashion label began somewhat accidentally. About a year ago, the Altadena, California–based artist came across a random hashtag from influencer and YouTuber Beth Jones, #alwaysplaydressup, encouraging people to dress up (if only for themselves). As Sanders perused the hashtag, she saw a bunch of creators not only posting amazing outfits, but also creating things for themselves to wear. Inspired, she made her first shirt. “I had a bunch of floral tea towels, so I took one with a beautiful Bermuda flower on it, and paired it with a vintage quilt from the ’90s,” she says of her creation.

Jones ended up re-posting Sanders’s top to her thousands of followers, and Sanders instantly gained a fan base for her work—despite only having made the one top. She knew she was onto something. A year later, the designer specializes in turning tea towels, quilts, and table runners into puff-sleeve tops, button-up shirts, and sun dresses. Her pieces get snatched up quick by one of her 43,000 Instagram followers.

Having grown up in Laoag City in the Philippines, Sanders is no stranger to making something new out of the old. Her mom was a designer, and she always remembers her making things out of the most unlikeliest fabrics. “My grandparents would come back to the house, and often all of their curtains and bedsheets would be gone,” she says. She fondly recalls visiting thrift stores or RagHouses and scouring for striking fabric together with her mom. “RagHouses gather donations from across the world,” says Sanders. “They’re in warehouses, and it’s organized by every single category you can imagine—vintage band tees, denim, collegiate jackets. We always looked for textiles that had a sense of heritage.”

She went on to work in the fashion industry for the past 15 years, including at St. John, BCBG, and Target. While she learned the ropes of the industry, she realized working for a large company was not her true passion. “I saw the dark side of what fashion has really become, in terms of the consumption of fashion and mass-market scales,” says Sanders. She knew she wanted her work to be more sustainably-minded, and her new line allows her to give forgotten fabrics a new life. “I love creating something that uplifts its original intention,” she says. 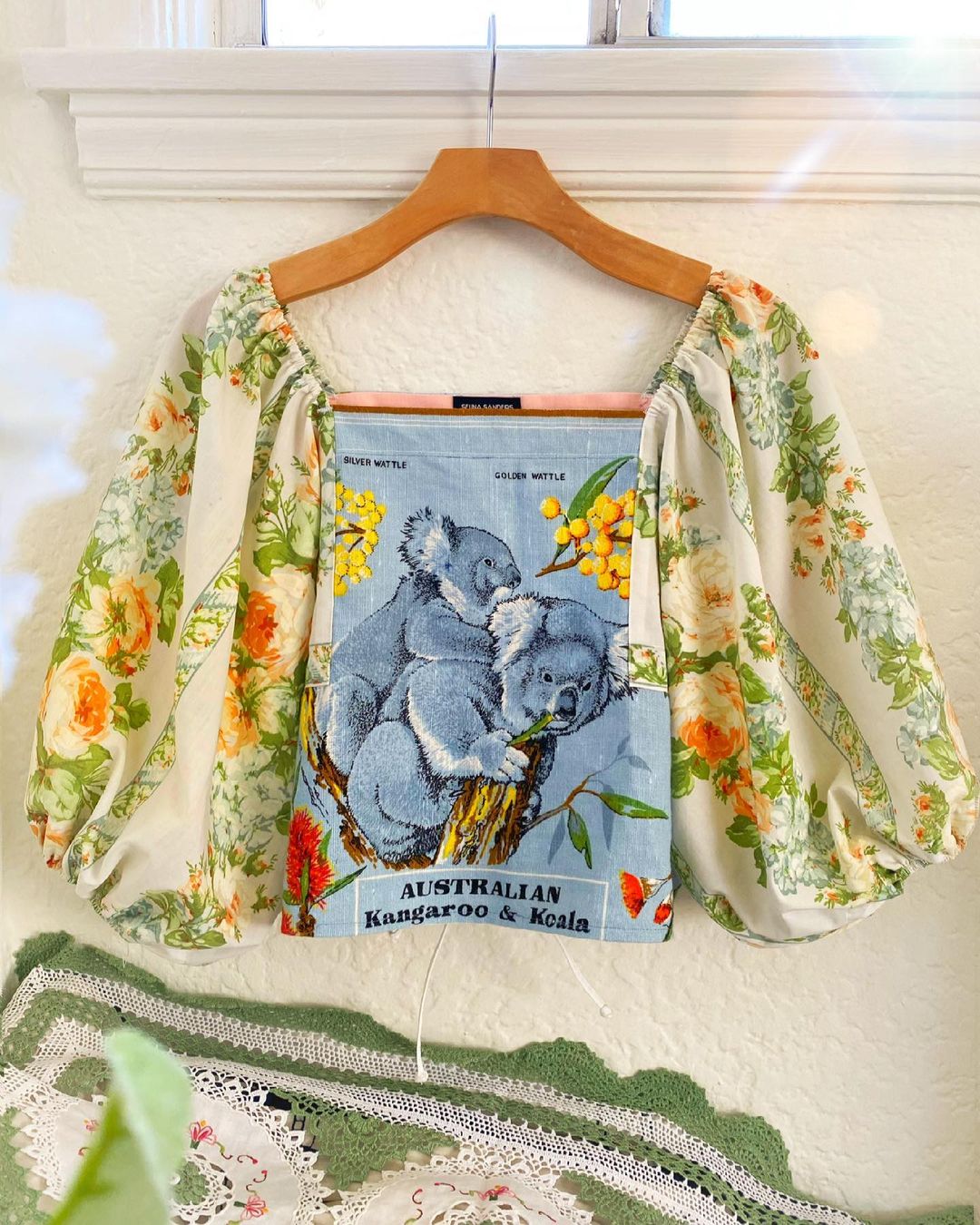 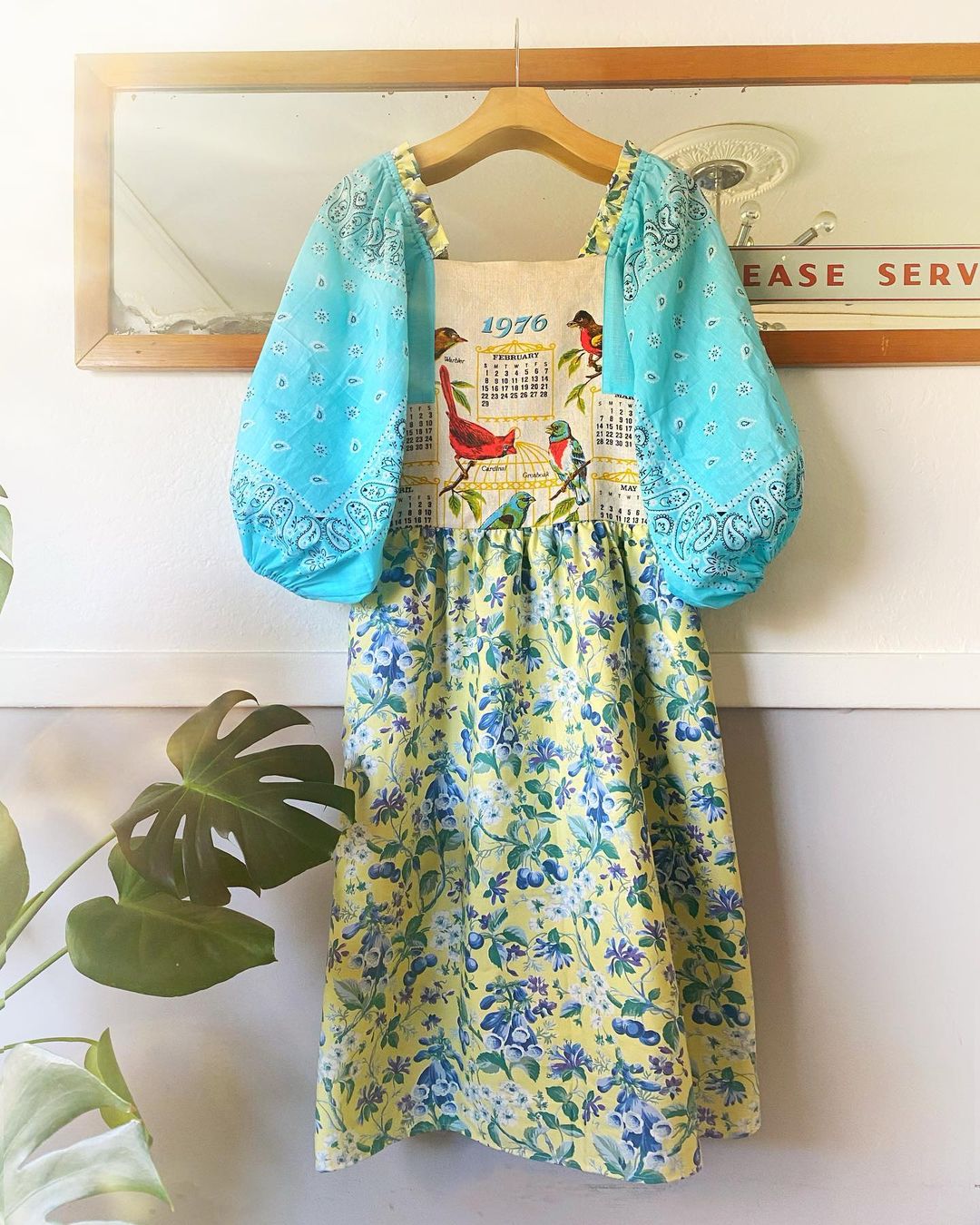 Everything Sanders makes is one-of-a-kind and made to measure from her home in California. Her ready-made items drop on every third Friday of the month (the next one is on April 16.) For a more customized experience, customers can also send her their own secondhand textiles, and she will combine it with her own vintage stock for a patchwork finish. “I’m a huge vintage textile collector, especially anything print-driven or quilts,” says Sanders of her stock, adding that she gets many of her secondhand textiles on eBay. “I always ask the eBay seller if they have a history [of the textile]. I like to imagine the woman who embroidered it.”

Though she makes use of all sorts of textiles, from pillow sheets to table runners, tea towels have been one of her most-requested materials so far. Whether the towels are embroidered with images of old clocks, Australian koalas, or vintage cars, both Sanders and her customers are drawn to the kitsch factor. “Tea towels were originally used as an additional decoration within tea service, but in America, tea towels have become more of a souvenir,” Sanders says. “I love the fact that they can capture a sense of time.” She also loves the challenge of using different-sized tea towels, and incorporating them into her designs. “I have to do a lot of math and pattern work, and be very strategic about where I place them,” she says.

In the spring-summer, she’ll experiment with new silhouettes, such as new dress shapes and possibly even menswear—but whatever the case, the design will still always revolve around the fabric first. “When I get a towel or an embroidered linen, I immediately know what it will go with,” she says. “I have so many fabrics, but I literally remember each and every one of them!”