The Story of the Most Influential Music Video in Menswear History 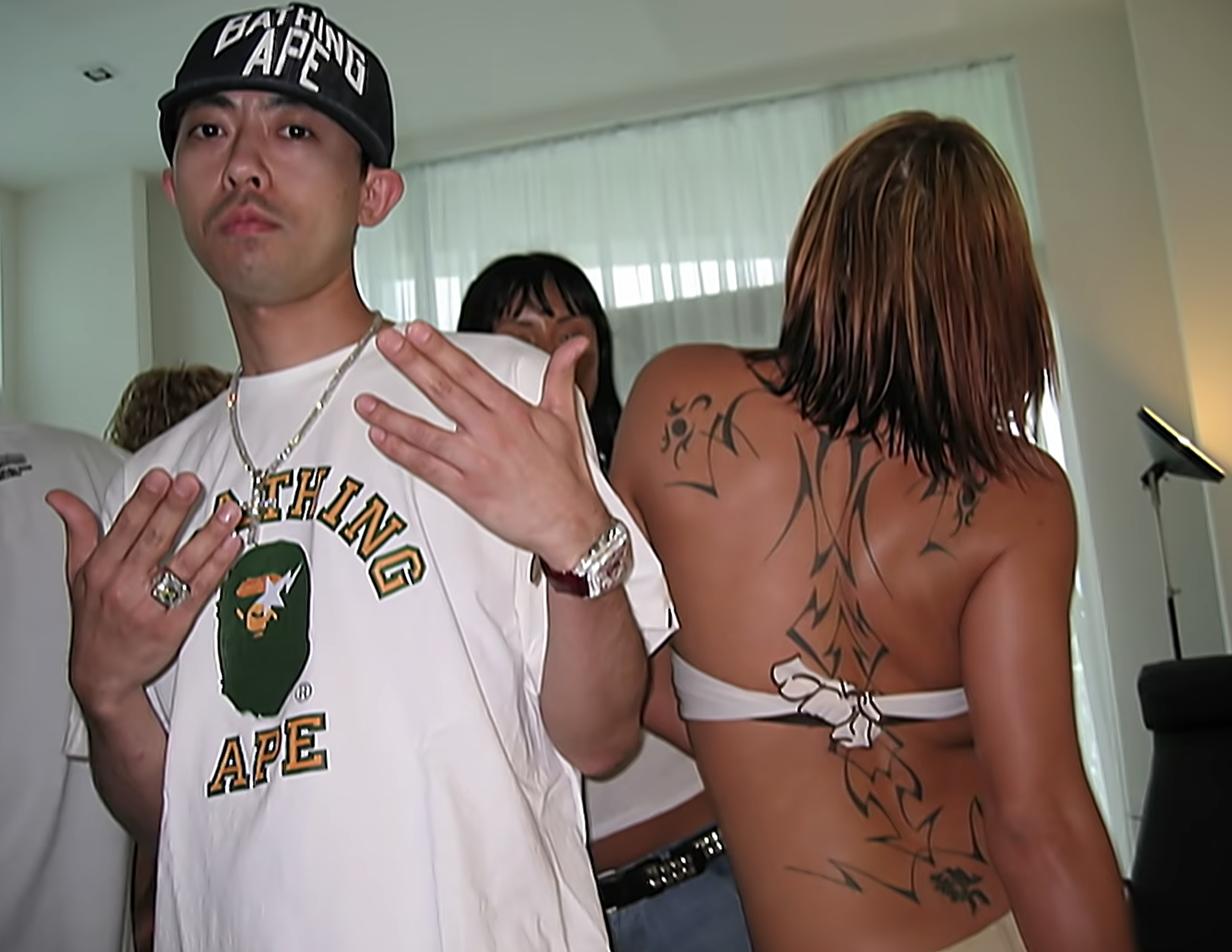 In just over four minutes, the video for “Frontin,’” Pharrell’s 2003 single, tours us through a house party in Miami. Lenny Kravitz mingles with Japanese streetwear designer Nigo. Lanisha Cole utters the secret phrase—“Neptunes Presents the Clones”—to enter the party, and immediately catches Pharrell’s eye. Jay-Z, in a banana-yellow shirt, appears momentarily, mostly through the lens of a digital camera. Always lingering in the background is a halfpipe, welcoming skaters and red Solo cups in equal measure. For a certain kind of young man, it was revolutionary.

Rhude designer Rhuigi Villaseñor was one of those guys. He was almost 10 at the time, and remembers instantly grabbing onto every reference in the clip. “It was a preview of [Pharrell’s brand] Billionaire Boys Club], and I remember I was like, ‘What is that T-shirt? I need that, I need the Icecreams,’” Villaseñor says. Something funny happened after that, he says. Rappers kept starting fashion lines. Nigo began collaborating widely stateside. Skateboarding exploded in relevance. The vision of a hip hop-driven, streetwear-inflected lifestyle presented by “Frontin’” in 2003 was basically the blueprint for everything that became cool in the 18 years since.

“‘Frontin’,” Villaseñor declares, “is probably the most important music video for our culture.”

The video’s firsts were numerous. “Frontin’” introduced the world to Pharrell’s BBC brand, and helped put Lauren London and Cole on the map. It was one of the first times Hov talked publicly about his relationship with Beyoncé, and made it cool to put a Japanese streetwear designer on the party guest list. The way Villaseñor tells it, Pharrell’s Audemars Piguet Royal Oak perpetual calendar was formative in the watch world, too. “Back then, we’re living through it. You don’t realize,” says Jimmy Gorecki, a former member of Pharrell's Icecream skate team and now the founder of the brand JSP, tells me. “20 years later it’s like, ‘Wow, they didn't have to wear Orchard Street, they didn't have to put in a mini ramp,’ But because they did we're looking back back on how important those moments were now.”

One of the most important moments comes early in the video, just as the guitar kicks in.The camera hovers over a cubby shelving unit with neatly arranged clothes before taking interest in one particular T-shirt stack. The tees are printed with the phrase “Billionaire’s Boy Club” or the brand’s now-familiar astronaut logo. “Yeah, that [“Frontin’” video debut] was calculated,” Pharrell told Complex. Today, BBC may not have the same cultural cachet it once possessed, but the video served as a springboard for one of the longer-lasting rapper-design projects in recent memory. Nearly two decades later, BBC has stores in New York and Miami and is still pumping out collaborations with Reebok and Timberland.

Pharrell wasn’t the only one playing influencer in the video, though. Jay-Z, the video’s other star, wore a T-shirt from now-defunct streetwear brand Orchard Street. “My girlfriend at the time, Jocelyn, was assisting Jay's stylist and brought a bag of gear to him a few weeks before the shoot that had that shirt in it, and the rest is history,” says Orchard Street founder Greig Bennett, who now serves as the vice president of brand creative at Stadium Goods. You’re more likely to see Hova in Tom Ford these days, but as Gorecki notes, his co-sign in the video was a big deal. “That was really cool that Jay had this streetwear shit on,” he says. “There were a lot of different cultural touchpoints in there that were moved into the hip-hop space.” The brand has long been out of business but Orchard Street remains relevant to this day: Travis Scott recently wore a pair of the Nike Dunks the brand customized and released by hanging on telephone wires and lamp posts almost two decades ago.

But the video’s impact is in the collision of its constituent parts—less about specific references than the way Jay-Z wears a little-known streetwear brand alongside Nigo while dudes skate in the background. “This video crossed the streetwear shit into the mainstream and onto the television,” Bennett says. “The mansion party with the halfpipe and red cups was lit.” If you don’t take Bennett’s word for it, how about this? A reconstruction of that same halfpipe appears in Virgil Abloh’s recent exhibition at the Institute of Contemporary Art museum in Boston.

Nowadays, with brands like Supreme and Palace at the top of the fashion food chain, the link between skateboarding, streetwear, and hip-hop is undeniable. That wasn’t always the case, though. “Back then [skating] was still pretty misunderstood and kind of awkward for skaters to even dabble in that world [of streetwear,]” Gorecki says. “As synced up as they were, there was still this weird underlying relationship between the two.” He jokes that you couldn’t accuse Pharrell of jumping on what he calls the “skateboarding gravy train” because no such thing existed at the time. This video helped shovel some coal (or, er, gravy?) into that train’s engine.

For a lot of kids watching, “Frontin’” sparked the beginning of any number of lifelong obsessions. Gorecki says he’s met plenty of kids over the years who got into skating because of Pharell and his Icecream team. For Villaseñor, Pharrell showed him a way of life: launch a streetwear brand, hang out with Nigo, and build a party around a halfpipe. When a preteen Villaseñor first saw this video there was no way for him to know that nearly two decades on his own brand would leverage the undying support of none other than...Jay-Z. See, the lessons from “Frontin’” really are timeless.