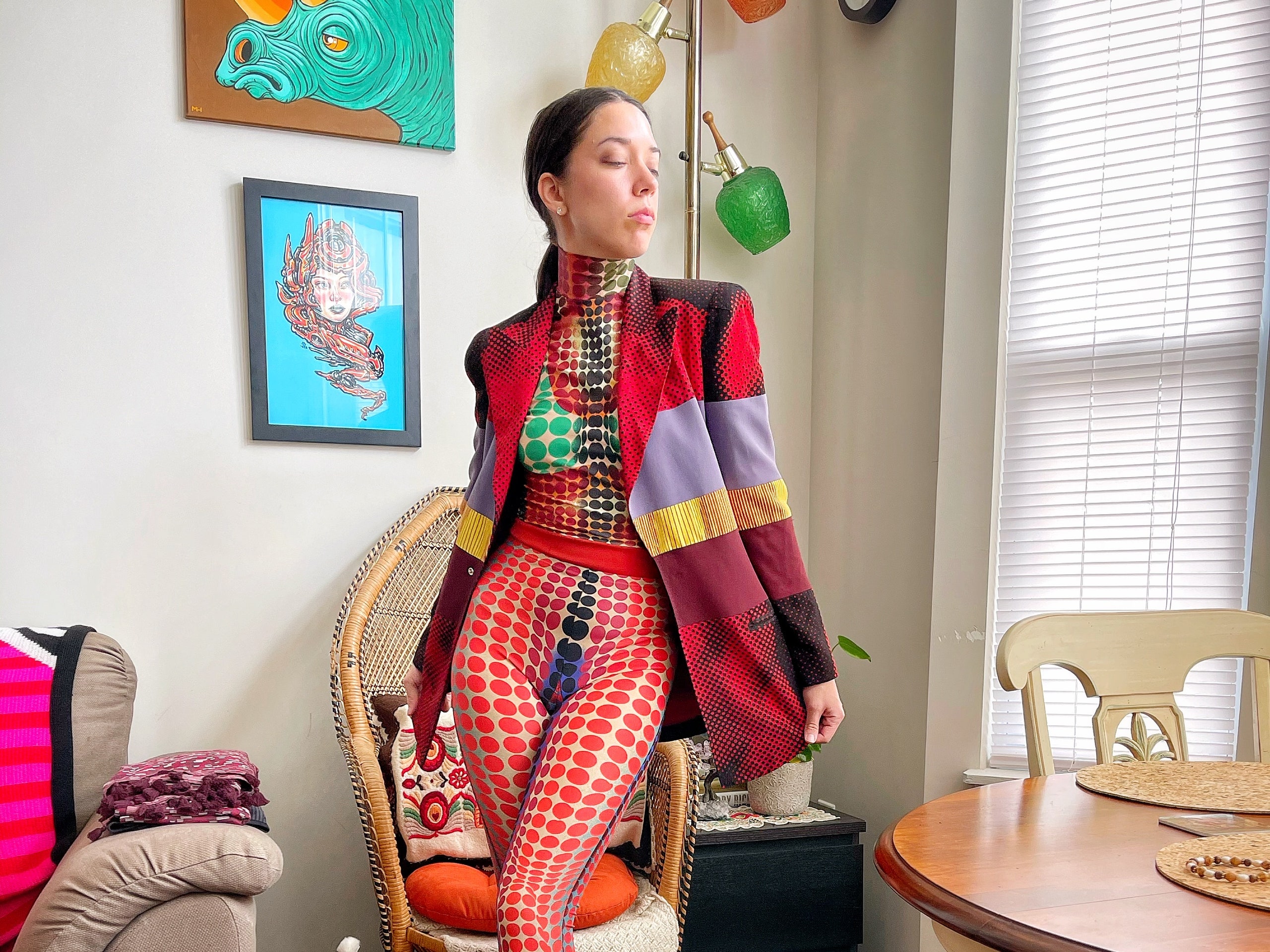 When Monica Sallay of Indianapolis, Indiana, runs errands or commutes to work, she tends to get some stares. While Sallay, 29, loves vintage fashion—including the likes of Jean Paul Gaultier, Chanel, Issey Miyake, and Comme des Garçons—the pieces in her collection are not a standard mesh top or a classic bag, but often a little more extreme.

An associate partner marketing manager at a software company, Sallay regularly opts for the likes of an ultra-rare cyberdot Jean Paul Gaultier jumpsuit from fall 1995, or an Issey Miyake dress with a comic book graphic that stretches from head-to-toe. Sallay’s collection is vast, Instagram-worthy, and certainly turns heads. “The reactions from people are often comparisons,” she says. “When I was wearing a Jean Paul Gaultier pinstripe suit with broad shoulders, this guy on my team compared me to someone in an ’80s rock band. My fiancé calls one of my Miyake tops—it’s orange and has these giant, sculptural [elements]—Emperor Palpatine. But then I also get people who are honestly super-interested in what it is.”

Sallay first fell in love with clothes as a young girl growing up in a suburb outside of Indianapolis. She describes her mother as planting the style seed, noting that “she had amazing style and still does till this day.” In high school, Sallay had switched from a uniform-wearing Catholic school to a public school where she had the opportunity to explore her look. At that time, in the mid-2000s, Sallay was watching Gossip Girl and identified with the style (“not attitude,” she adds) of Blair Waldorf’s prim, uptown aesthetic.

“I was finding my way into establishing myself with fashion and getting a deeper knowledge around the pieces as I got into high school,” she says. “I was completely obsessed when the show premiered.” Sallay would scour the internet—more specifically the website Seen on TV—to find what Waldorf’s character was wearing and then recreate the look. “What I would do was before the episode premiered, I would figure out the item, and then the day after, I would wear it to school,” she adds. “People loved it!”

Eventually, Sallay grew out of her Gossip Girl obsession, and by the end of her junior year, she began delving into the world of thrifting, regularly hitting up her local Salvation Army or scouring eBay. (She recalls her first big eBay purchase as a pair of orange Chanel flats.) With her eye on eventually getting a job in the industry, Sallay enrolled at the Parsons School of Design and moved to New York. There, Sallay explored her look further, frequenting Beacon’s Closet and a Salvation Army on the Upper East Side where she would attend the window sales.

“People would line up at 6 in the morning,” she remembers. One day, Sallay had walked by and had seen a white dress with “really elaborate embroidery.” With her day free, she decided to stand in line for the sale. “I was about fourth in line,” she says. “Everyone ahead of me was interested in the electronics.” She ended up snagging the dress for $100, and it was none other than a fall 2006 Balenciaga design by Nicolas Ghesquière; more specifically, Look 21. “It’s my baby,” she says. “I thought it was going to be my wedding dress.” It turns out this prediction wasn’t completely off: She plans on donning the piece for her courthouse wedding in May. 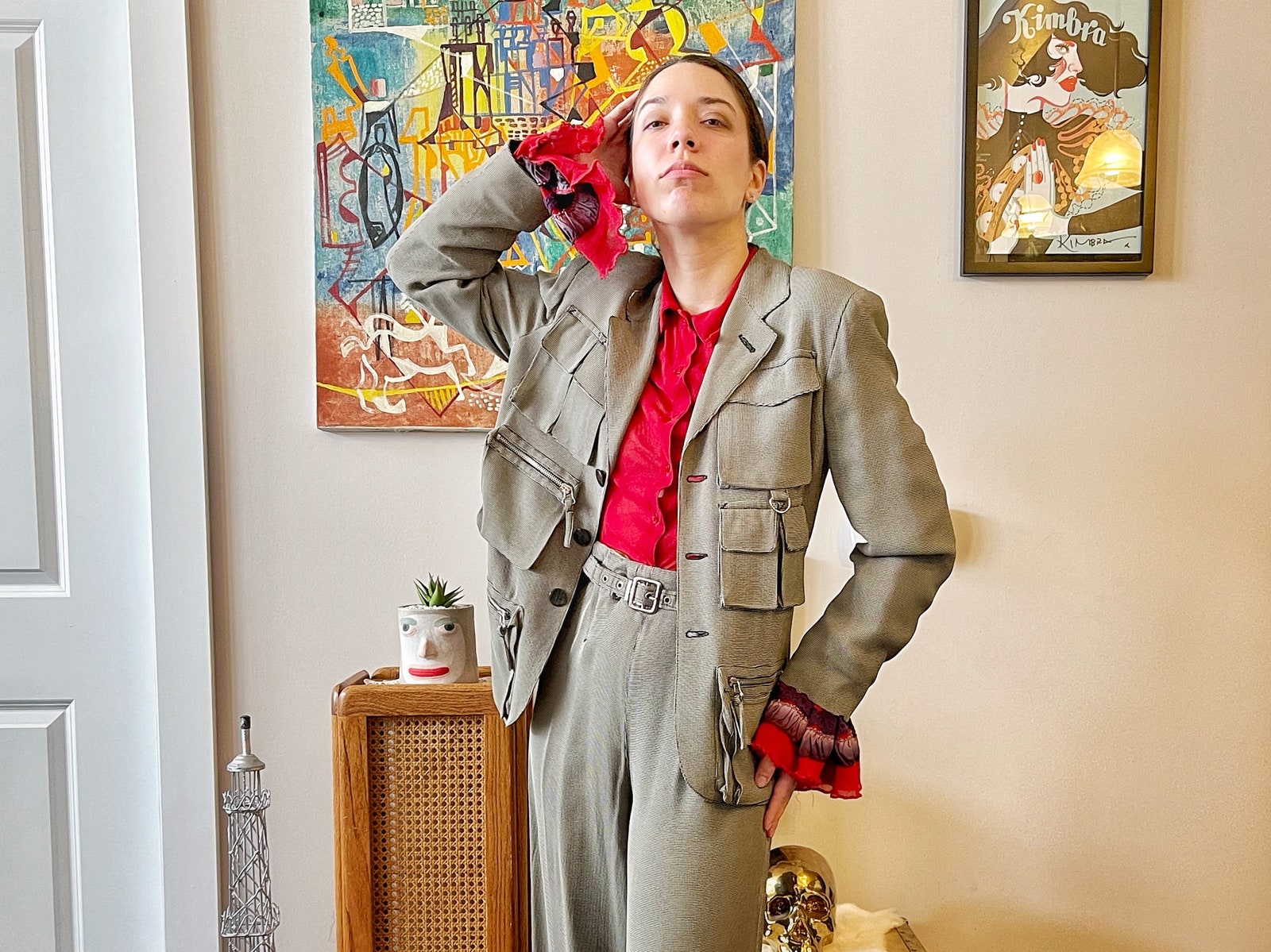 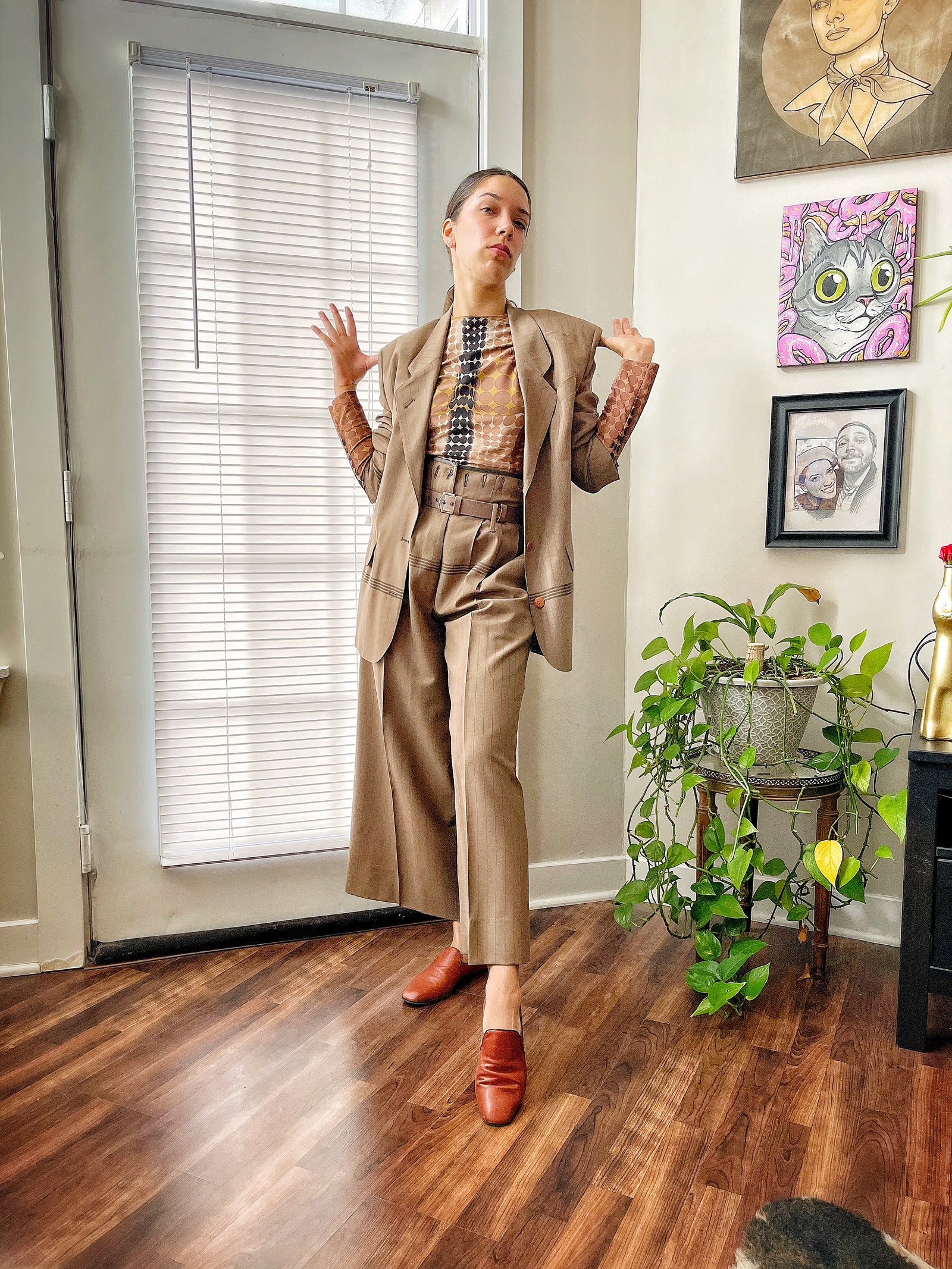 Despite picking up the bug for high fashion thrifting in New York, Sallay eventually decided to pursue a very different career, transferring to Purdue University back in Indianapolis where she received her bachelor’s in computer graphics technology. Regardless of location, however, Sallay is still very much entrenched in vintage collecting. While Sallay’s collection is ever-growing, she has a particular soft spot for Jean Paul Gaultier. Currently, she owns 25 pieces from the label, including five cyberdot items long before prices skyrocketed thanks to their popularity with celebrities such as Kim Kardashian and Cardi B. (A catsuit can fetch well over $15,000.) Sallay’s love for Gaultier’s designs goes far deeper than hype, too. “It’s beyond the vibrant colors, the bold cuts, and signature details,” she says. “For me, Gaultier represents the fantastical whimsy that fashion is meant to capture. Wearing it is a feeling in and of itself. It’s empowering, and in it, I feel unstoppable.”

Another benefit? Her clothes are an eternal conversation starter. “One of my favorite parts that I’ve always loved about clothes is that they are an icebreaker. People get to see what you are on the inside on the outside,” she says. “It really helps get down to a more personal level.”