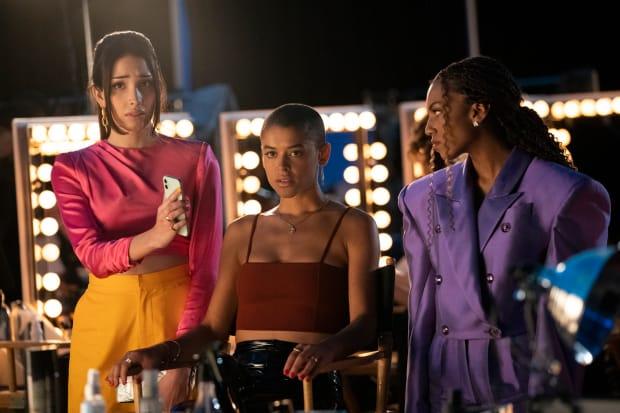 "If your clothes were on 'Gossip Girl,' that was a moment," says Alice + Olivia's Stacey Bendet. "It was like having your clothes in InStyle or Vogue."

Alice + Olivia had a big presence in the original "Gossip Girl," which aired for six seasons, from 2007 to 2012. Blair Waldorf and Serena van der Woodsen, plus an assortment of other characters, wore its pieces throughout the show's run, and Bendet remembers how, at the time, an item would sell out after one of the two female leads wore it on an episode. "Gossip Girl"'s impact, though, went beyond that.

"They were the sort of icons of New York at the time," she says. "If you lived in and were a public figure in New York, you wanted to make a cameo on 'Gossip Girl.' As a designer, you wanted your clothes on those girls...Those girls became icons, and each has their own style — you were either a Serena, a Blair or a Jenny. Were you the edgy rock-and-roll girl? Were you the Upper East Side princess? Were you more bohemian? Girls really began to define their dressing off the styles of Jenny, Blair and Serena at the time."

As we know, that influence outlived the show. Even after "Gossip Girl" went off air and the stars distanced themselves from their Upper East Side counterparts, they continued to be referenced in show notes for designer collections, fashion copy in magazines and content franchises online (ahem, #WaldorfWednesday and #SerenaSaturday).

"I remember a scene where Blair had on this really cute, kind of '50s floral-print dress with a belt that we did — that image still surfaces on social media," Bendet says.

Ahead of the premiere of the new "Gossip Girl" on HBO Max (on July 8, if you haven't already had that date circled on your calendar and the day blocked off from any scheduling conflicts), there's been a ton of discussion around the clothes worn by the cast on set, especially when it comes to the wardrobes of the new women of Constance Billard: Julien Calloway (Jordan Alexander), Audrey Hope (Emily Alyn Lind), Zoya Lott (Whitney Peak), Monet de Haan (Savannah Lee Smith) and Luna La (Zion Moreno).

Never mind that an episode has yet to air, that the show's plot lines are shrouded in mystery and that we've only gotten a handful of teasers on social media and a single trailer. There are already numerousaccounts on social media dedicated to ID'ing the clothes and accessories the characters wear, based off of a combination of the aforementioned HBO Max-sanctioned previews and paparazzi snaps from filming. That's been enough to get people talking — and it's been enough to inspire creatives within the fashion industry.

According to Renee Prince Phillip, the CEO of Monse, Laura Kim and Fernando García saw those early, viral paparazzi images of the actors filming on the steps of the Met in their uniforms and were particularly struck by Jordan Alexander, to the point that she became a sort of muse and jumping-off point for the brand's Fall 2021 collection. The line hasn't yet debuted to the public, but it was released to buyers earlier this year. It was also sent to the "Gossip Girl" costume department.

"I reached out — I kind of hounded HBO and 'Gossip Girl,' actually," Phillip says. "I had a friend of mine connect me when I realized it was Eric Daman's team doing the costumes… After we shot the collection, a friend introduced me to Eric's team and I reached out with our lookbook and offered to make anything in a duplicate sample that they would need, because we knew that they would be there for a long period of time... They've had our samples for quite a while now. We've just been waiting patiently to see if anything was going to get placed."

Monse did, indeed, get a placement — on Alexander's Calloway, no less. "As soon as we saw Jordan wearing our sweater, we immediately increased our production units," Phillips says. "We're definitely hoping to sell a lot more. It hasn't shipped yet — it won't ship for another couple of months — but we're definitely hoping for a great impact."

In the past, Monse sightings on TV shows have been mostly coincidental, the executive says: "We don't often get many requests for placement on a TV show. Once in a while, it happens accidentally, where we didn't even know what was going to happen, either [someone] buys a piece from a store or somehow gets one of our pieces. It's a great surprise."

Still, Phillips has a feeling having a presence on the new "Gossip Girl" will be different — and more consequential. “Obviously, it's fun when you get an item on a TV show, but it's not the caliber of this," she says. "It's truly a fashion moment — this and 'Sex and the City.' I think this can be very impactful."

Cinq à Sept is another New York-based contemporary brand that has been sprinkled throughout the new "Gossip Girl," on a range of characters. And it's already seeing some of the buzz around its pieces appearing on the show.

"Anytime we get any placement — be it on a morning TV personality or a pop star or a TV show — we definitely see [an impact]," says Jane Siskin, founder and CEO of Cinq à Sept. "Every item resonates at a different level. Sometimes we hear a little chatter; sometimes, if it's available on our website, we see sales go crazy. A lot of times, what we look at a lot is social media, and we start to get more engagement and followers. It impacts us in so many different ways."

The brand has experience working with the wardrobe teams on TV shows, specifically, and converting these cameos into sales: Cinq à Sept’s PR Director Noreen Scott notes that its pieces regularly appear on "Dynasty" and will be on the upcoming season of Apple TV's "Truth Be Told." According to Siskin, having Anne Hathaway and Sandra Bullock wear some of its dresses in "Ocean's Eight" was also a big moment. Still, like Phillip, she expects "Gossip Girl" to be different. Bigger.

Alice + Olivia is back in the "Gossip Girl" universe, already clocking in placements on various characters in the reboot (including a spot in the early previews). And like Monse's Kim and García, Bendet was inspired by "Gossip Girl" for Fall 2021 — except, she turned to the original source material, thanks to a quarantine rewatch spurred by her children.

"My two older daughters started watching all the seasons," she says. "Rewatching it was such a blast from the past and gave me so many memories."

The designer actually brought on Daman to help her with the collection, and they connected at the suggestion of a member of the original cast. "I always had such a work crush on him because I just love the way he styles and I love the work he does. I was joking with my friend Michelle Trachtenberg, who was Georgina on the show, 'I'm going to do a 'Gossip Girl' collection,'" she says. "She was like, 'Well, you've got to bring in Eric.'"

Daman ended up consulting on and styling Alice + Olivia's Fall 2021 virtual presentation, which debuted in February. "We wanted it to feel true to what the original 'Gossip Girl' was, but also think forward to what the next 'Gossip Girl' is," Bendet says. "We wanted it to feel modern and now, but also wanted to reference some of the moments and characters of the past, and I think he helped us put a little bit of a spin on everything."

Bendet was set on tapping into that "feeling of nostalgia you get when you're watching the show, that urge to just be back in New York City… the overall feel of wanting to have that aspirational New York moment, where the girls are strong and bold" with the Fall 2021 collection. "Those characters were strong, bold and stylish, and they inspired you." The response, she says has been very positive: "There's been so much excitement over the clothes and the styling and the vibe… People, buyers in our stores and everyone seemed really excited about it."

Designers have a feeling that this already-bubbling interest in the fashion of the new "Gossip Girl" will translate into a desire for Constance uniform-inspired pieces for fall.

Monse actually moved up its Fall 2021 debut — the plan was originally to unveil the collection for the first time during New York Fashion Week in September — to coincide with the "Gossip Girl" premiere, at HBO Max's suggestion. On July 7, Phillips says, there will be a party, a screening of the pilot and a Monse runway show styled by Eric Daman, to be streamed on HBO Max. The autumnal line "looks very, very school girl," according to the executive: "To me, [it] screams 'Gossip Girl.' Even when [the team at 'Gossip Girl'] saw it, they were like, 'Oh, my gosh, this is like literally the perfect collection.' You can definitely see where the inspiration came from."

Siskin notes that, for a brand like Cinq à Sept, you can see the many different pathways through which a customer gets to a product — social media, celebrity, stockist. Still, she's picked up on how shoppers can be influenced by television, specifically, to try a certain style or silhouette. She brings up the response to "Bridgerton" again: "We had the balconette neckline, coincidentally, in the collection, and everything in the collection we shipped that had a balconette neckline has blown out. Is that a 'Bridgerton' effect? Maybe. It certainly affected me that way. I wanted to look like that every day."

Another big thing we'll see: a clamor to dress the stars of the new "Gossip Girl" off-screen. Peak's already inked a deal with Chanel; no doubt more contracts will follow for the rest of the cast.

"They're going to be important for designers and brands to dress," says Bendet. "It's been a while since there's been a show that's been really important and really exciting for the industry, so I think everyone's excited to sort of have that."

Her takeaway? "I think everyone's going to need our plaid skirt and knit plaid cardigan for fall."