Megan Fox Is Back, and She's Fully in Command

Originally published in
Who What Wear 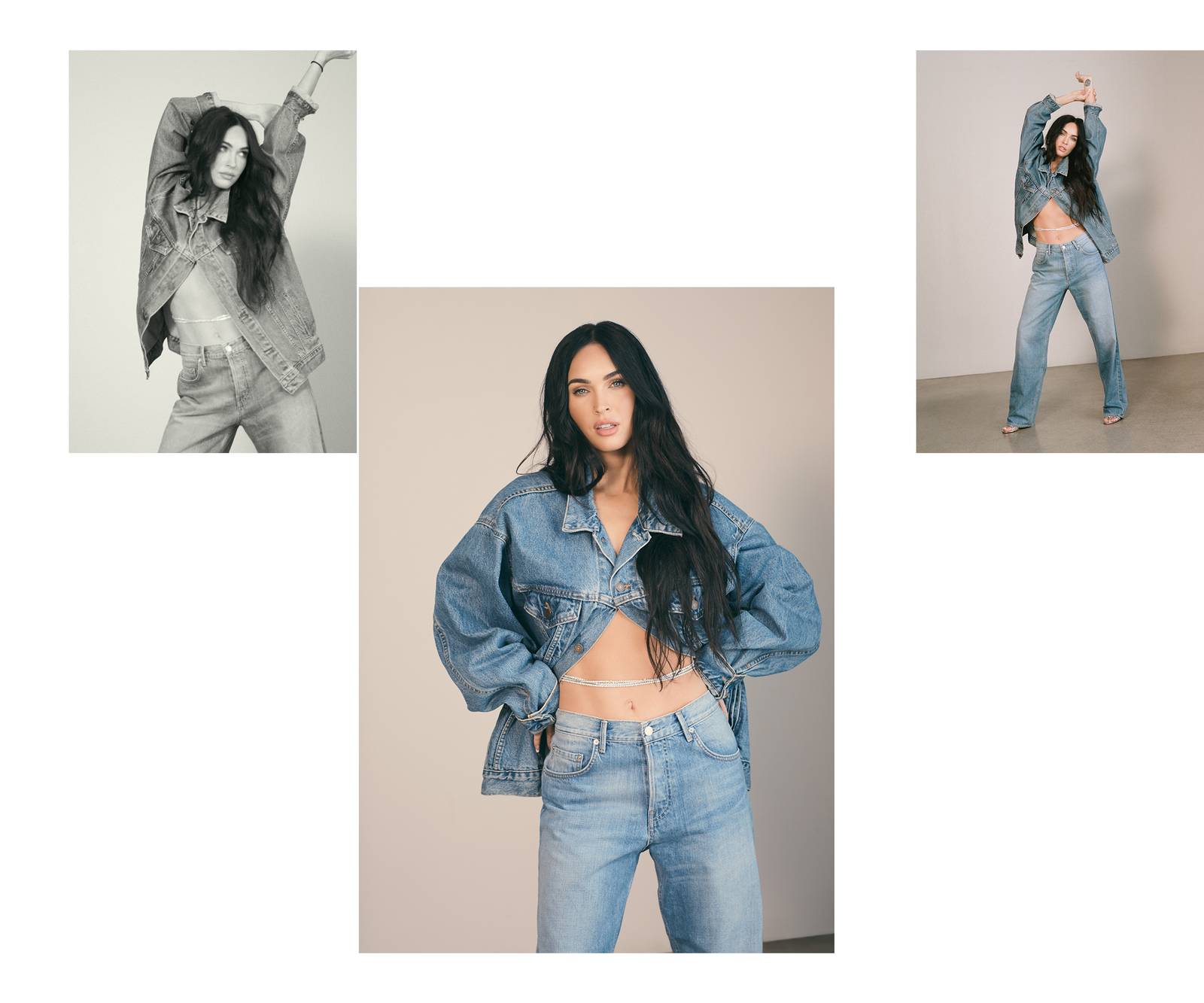 Megan Fox hardly needs an introduction. Since the Transformers film franchise catapulted the actress to megastardom in 2007, she’s remained a fixture in Hollywood, starring in a series of action-packed thrillers; earning cult status in the indie favorite Jennifer’s Body; and, as one New York Times article put it, serving as a “universal barometer of hotness.” But after a few years of flying under the radar, she’s making a massive return to the spotlight with a fresh perspective, a new fashion aesthetic, and a much-buzzed-about relationship. So yeah, it seems a reintroduction is in order.

To say that Fox has been making headlines lately is an understatement. Fashion outlets have been abuzz with coverage of her street style. A new, younger audience has been busy turning Fox’s boy-eating character in Jennifer’s Body into a feminist hero. And of course, the rest of us can’t stop talking about her relationship with rapper Colson Baker aka Machine Gun Kelly (or meticulously unpacking their style as a couple). It’s not that we’re necessarily privy to a new version of the actress. She’s still the same Fox—just wiser, more sure of herself, and a hell of a lot less willing to invest emotional energy into what anyone says.

I caught up with Fox as she was waiting to board a flight (remember those?) for what’s now a busy press circuit promoting two upcoming films she has out this summer. Chalk it up to my fuzzy speakerphone or the fact that, for her, it was a travel day, but I picked up on a slight haziness in her voice. Whatever it was quickly dissipated as she described the atmosphere of our cover shoot that took place in L.A. just a few days prior. “I was pretty sick,” she admitted. “I thought, ‘Oh, God. I don't know if I’m gonna be able to pull this off.’” Spoiler: She did. There’s a twinge of a Southern accent in her voice, a slight twang that flattens out the vowels. She spoke candidly, slipping in a “well, shit” or “oh, fuck” as casually as some people would unconsciously say “like” or “um.” You realize she’s not pretending to be anyone or anything. She’s not putting it on. Speaking to someone with such name recognition as Fox, I found it delightfully disarming to hear her describe her style as “Hot Topic meets Middle America” or share her reactions to things—many things—as a resolute, “Oh, fuck no.” Despite her uncontrived nature, there’s no question that Megan Fox knows exactly who she is, a fact that was reinforced over and over throughout the course of our conversation.

That’s not to say the self-assuredness she now embodies didn’t come at a price. For the majority of her career, Fox has faced intense scrutiny, has often been buried under a barrage of harsh and outright sexist media coverage, and has had several of her movies written off as total flops. One example in particular comes to mind: a clip that resurfaced last year of a 2009 interview she’d done with Jimmy Kimmel. In it, she expresses how she was sexualized in Hollywood as a teen, and Kimmel basically responds by making a joke of it. The whole ordeal has since sparked conversations about the unfair treatment the actress endured at the hands of the media. Fox’s defense mechanism? To simply block out all the noise. In front of the camera since the age of 15, she has navigated an industry that has been, shall we say, less than kind to her. In turn, she’s become one of the rare examples of celebrities who have managed to not just fold, and she has come back even stronger. Never one to let the critics deter her (at least outwardly), she has pushed forward at a pretty consistent clip. She’s starred in at least one feature film almost every year since 2007, but for most of that time, she stayed out of the public eye and avoided social media. “I spent so many years just hiding,” she said, reflecting on that time. A decade and some change later, she’s finally ready to let her audience see her fully.

The kind of transformation Fox is going through may be subtle and may be a largely internal one, but it manifests most clearly in her newfound relationship with fashion. Last fall, Fox began working with Maeve Reilly—the styling force behind some of the most talked-about celebrity looks—and together, the duo have already created some pretty memorable ensembles with the headlines to show for it. The ultra-cutout Mugler dress she wore to the Billboard Music Awards, anyone? How about the blazer-and-crystal-mesh-bra combo she was casually spotted in? Fox may have joined the sartorial ranks of A-listers like Hailey Bieber and Ciara, but before moving in this new direction, she said with a laugh, “I was kind of rebelling against all of that. I wasn’t opening myself up to fashion at all.”

She joked about their partnership being an uphill battle for Reilly (“she basically threw away my entire closet, which was garbage anyway”), but Reilly is also challenging Fox with looks outside her comfort zone. For instance, Fox told me how nervous she was to step out in that threadbare Mugler dress in the first place. “I was like, ‘Fuck no. I'm not wearing this.’” The risk ultimately paid off as we know, so trusting in the process and staying open are becoming her new MO.

As I’m coming to learn, like most things in Fox’s life, it’s all about trusting in the universe’s bigger plan. “When I met [Colson Baker], I knew instantly that this is a soul I’ve traveled with before, that this was a soul-mate connection, and that there was a purpose here,” she explained. But it wasn’t without hesitation on her part: “There was my logical brain chiming and being like, ‘This will never work for 101 reasons.’” It was a classic case of head versus heart, and she told me she even went so far as to make a pro/con list. In the end, her heart won out.

It’s an exciting time to watch Fox step into this new chapter, and there are two opportunities to see her take to the big screen again this summer. The first comes in the blood-drenched horror flick Till Death (in theaters now), in which Fox’s character, Emma, attempts to free herself from the shackles that quite literally tie her to her late husband. “It had been a minute since I was in this genre, if I’ve ever been in the genre at all,” she mused. “Jennifer’s Body isn’t a horror, really. It’s more like a dark comedy. [Till Death] was something I hadn’t done before. It felt fresh to me.” Next comes Midnight in the Switchgrass, an edge-of-your-seat thriller that Fox said she felt guided to be a part of. “It was definitely a vehicle—I’ll be honest—for me to meet Colson,” she laughed. ICYMI, the two notably met on the set of the film last year. “I knew he was gonna be in the movie, but the universe was just like, ‘Go do this. There’s something about this experience that’ll be really rewarding for you.’” Fans can watch the movie in theaters or stream it beginning July 23.

This calling or greater purpose was by no means limited to Switchgrass. When you consider Fox’s decade-long acting career, it may be tempting to view her through the lens of Hollywood’s deeply rooted misogyny and write off her roles as serving some ambiguous “hot girl” archetype as critics always have. But she takes a more purposeful, if not metaphysical, approach to the whole of her career. “Sometimes, you can just tell something about [an acting role],” she insisted, her voice taking on a sense of urgency. “Like, this is going to change me as a person. That’s what I want for my life: to constantly be evolving and growing.” Instinct, I now realize, is what guides Fox in every endeavor in her life. It’s her North Star. “I was never playing chess,” she added. “It has always been a game of intuition as to whether something resonated with me or not.”

Intuition, the universe, a higher calling—these weren’t always a part of Fox’s lexicon. It took years of enduring a constant stream of criticism for her to reach a pivotal point—a breakthrough, if you will—that changed everything for her. Toward the end of 2019, she was on location in Africa filming Rogue and happened to encounter one of her previous movies that had been pretty critically panned. “I’d been brutally reviewed for it,” she audibly shuddered. “I never watch the movies I do. My biggest fear is to watch and listen to myself.” Alas, she watched it anyway, and it was at that moment she was able to see herself objectively for the first time. “Wait, I’m not bad at it,” she said of her thought process at the time. “Also, this isn’t a bad movie. In fact, it’s totally fine. I can’t believe it got put through the ringer the way that it did.” Seeing the movie with fresh eyes was only one part of it. Validating her entire acting experience was another. “I can’t believe that I allowed myself to accept I was not good at this or that I had any sort of self-esteem issues based on how this movie was received,” she continued. “That caused me to sit and realize that I was sort of putting myself in a mental prison for the last decade. I decided that I just wasn’t going to be afraid anymore. I’m not going to live another day in fear. That was a shift in consciousness where I was like, ‘Fuck this. I'm just… I’m not going to be afraid anymore.’” Talk about a wake-up call.

Fox may be in the spotlight once again, but this time, she’s fully in control. Or rather, she’s fully in control of herself. Yes, the paparazzi seem to follow her every move these days, and yes, she’s once again the subject of the news cycle, but you might notice, for instance, how she’s still not very active on social media. That’s by design. When I inquired about whether keeping her Instagram comments turned off was another form of self-protection, her perspective was one of nonattachment. “People are conflicted and need a place to project their unhappiness. That will often come out on celebrities,” she declared. “That’s kind of what we’re for.” You can bet, then, that no matter what people have said in the past, are saying now, or will say at any point in the future about Megan Fox, she’ll be blissfully tuning them out.