In Fashion's Fan Fiction Era, Kiko Kostadinov Thinks For Himself 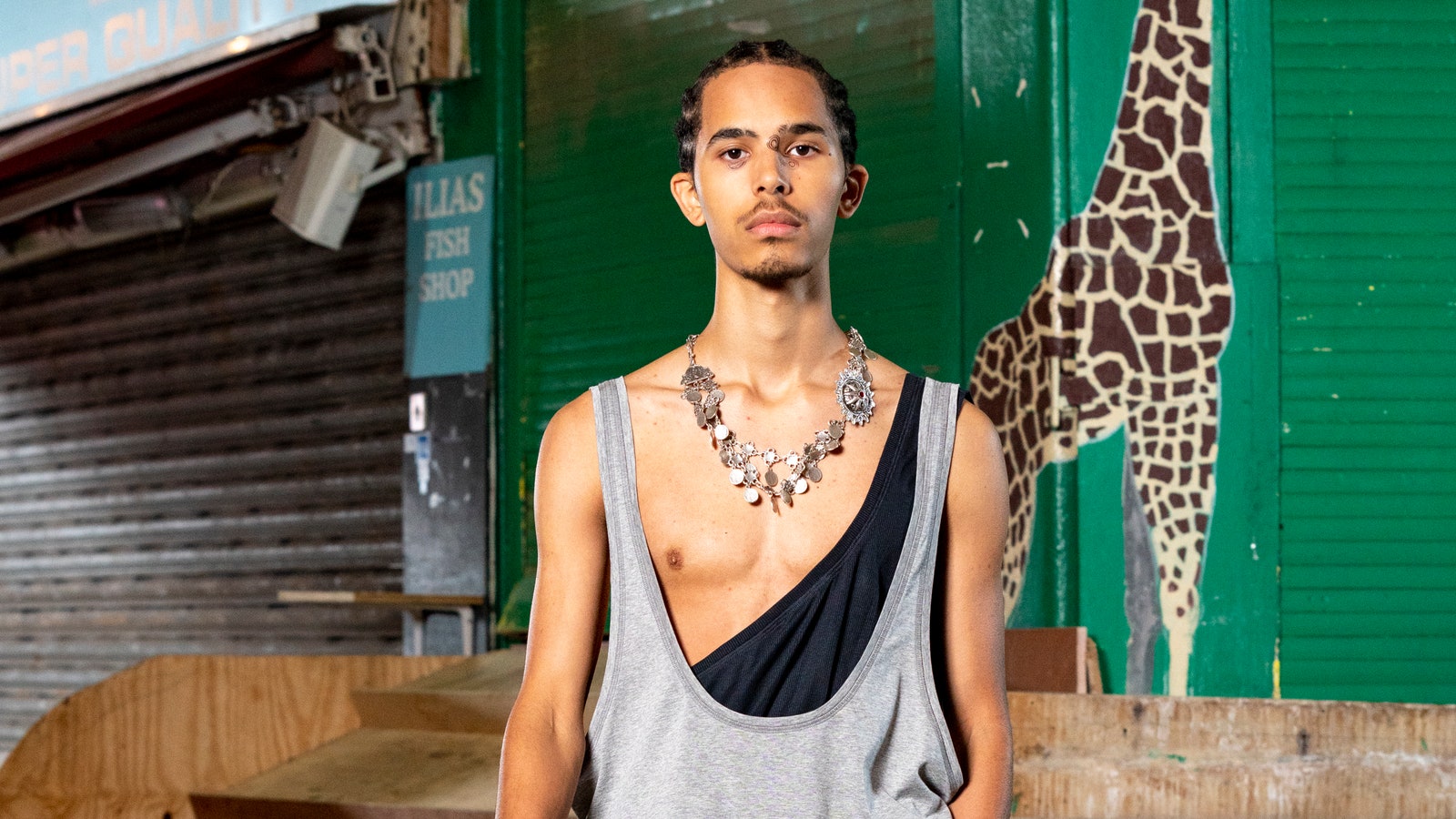 In recent years, our visual world has been ruled by a pack of designers and creatives I’ve come to think of loosely as fanfic auteurs. Think of A$AP Mob, echoing Wu-Tang. Matthew Williams remixing Alexander McQueen. The way the Safdies Scorsese-up Sandler. Olivia Rodrigo parroted the Ellen Von Unwerth photograph on the cover of Hole’s Live Through This for her own debut album—which betrayed the ethos beneath all this parroting. Courtney Love Cobain, a Gen Xer, thinks copying is uncool, but for a young person today, it’s just how we think: I loved this, so I want to embody it for myself. No ethical quagmires here, no siree. Creation and fandom are now one in the same. Are our idols any better than people working now? It’s hard to say, because none of us were there, but more importantly, nothing will ever be as pure and wonderful as something you took in with fresh, young eyes untouched by cynicism—even if you come upon it years after it made its debut.

Of course, fashion designers, operating in a world where originality is king (though rarely achieved), have a uniquely anxious relationship to influence. And so when this digitally native generation stuffs their collections with imitative gestures and even full-out looks that are less like homage and more like, well, copies, they proclaim it as a part of what they do. I’m thinking of Vaquera, which invented the term “fashion fanfic” with their heartsleeves recreations of pieces by Andre Walker or Miguel Adrover. And Williams at Givenchy, for whom Christophe Decarnin and Riccardo Tisci are much realer legends that Hubert de Givenchy; or Daniel Roseberry at Schiaparelli, who just did a show enthusiastically quoting Christian Lacroix. The sheer breadth of these designers’ aesthetics shows how pervasive this kind of creation has become. You might say it’s nostalgic—that everything is just looking back—but actually, it’s more complicated than that. It’s really a desire to create in your idol’s universe, toiling in their shadow, to get closer to them by imitation.

Last week, in the midst of revealing his Spring 2022 collection, the designer Kiko Kostadinov reflected on how his process differs from that of his peers, sounding a little tortured. “I struggle [with] wanting to replicate a specific era or a specific subculture or a specific period, or a specific body of work,” he said. “I can’t think, like, ‘I’ll pick a photographer and I’ll just recreate his characters in an almost identical way.’” That way of working “is not really about the clothes. But it’s about bringing light to a specific artist, and you just kind of follow the characters that he shot or created or painted. I struggle with that because I’m not really close [enough] to any subculture to feel like I was part of it.”

Kostadinov transcends the fanfic group. He is a designer’s designer, one who wants to show you something you’ve never thought of, instead of making something everyone already wants (It’s no surprise, then, that his clothing was all over A$AP Rocky and Rihanna’s circus-like video shoot this week.) Theoretically, he could easily veer into the fanfic territory: he grew up huffing the stuff on fashion message boards, and he’s also a big Yohji Yamamoto head. But like Yamamoto, Kostadinov thinks about garments a bit like a conceptual artist—his references are never to other designers, but to their processes of creating.

Take his obsession with performance- and workwear—in Spring 2022, there is a Dickies-like khaki suit with a big blue blouse spilling out like an apron, and also gilets inspired by those tiny Gold’s Gym tank tops musclemania dudes yank over their rippling torsos. But he pushes these pieces into something almost ornamental, something awesomely cold and at times frigid. “In a way,” he says, “it’s sort of like creating weird subcultures within the styling or the story.”

In conversation, he spent a long time lingering on process and conceptual design—which was particularly surprising because this was Kostadinov’s most intimate collection yet. He couldn’t travel while making it, and he began to feel even more closed in by the realities of Brexit (“Another boring subject,” he called it). “It just got me thinking about how my whole studio came to this country from another place to learn and be successful and just be creative in a different way,” he said, “because they couldn’t do that where they came from.” With Brexit, “you almost need to leave again and go somewhere else.” He also thought about his own reputation in Bulgaria, where he’s often asked to participate in magazine or TV features but always turns them down. “I’m almost like…I’m not from there. You know, that feeling.”

This collection, then, is “about fitting into a new place,” he mused. He made a discovery recently: he’s always been into the Italian Futurist painter Giacomo Balla, but only recently learned about Balla’s Bulgarian counterpart, Nikolay Diulgheroff, who, like Kostadinov, was an expat. He felt an affinity with him, which infused the collection with an alien sensibility: worksuits that look like space suits; tailoring that appears to be melting; hard and even hunky suits collaged with lace. For the collection video, a sideways iPhone is layered over a streetscene, showing the same view at different times and creating an almost frightening sense of displacement. Even if you didn’t know about the personal story behind the collection, it had an unusual sense of pathos.

Maybe that’s why Kostadinov had such a hard time with it himself. This season, he said, “drained” him. “I want to see it maybe in a month or two again, and just look at it,” he said. “Or maybe even when it's in the shops. I need to process it in a different way.”

Because he’s such a true original—and his idea of lathering up the utilitarian into something almost ornamental is so au courant—his influence is trickling up, influencing the sort of designers, like Jonathan Anderson and Raf Simons, who themselves are deeply influential. It seems the anti-fanfic auteur has become the subject of fanfic himself.