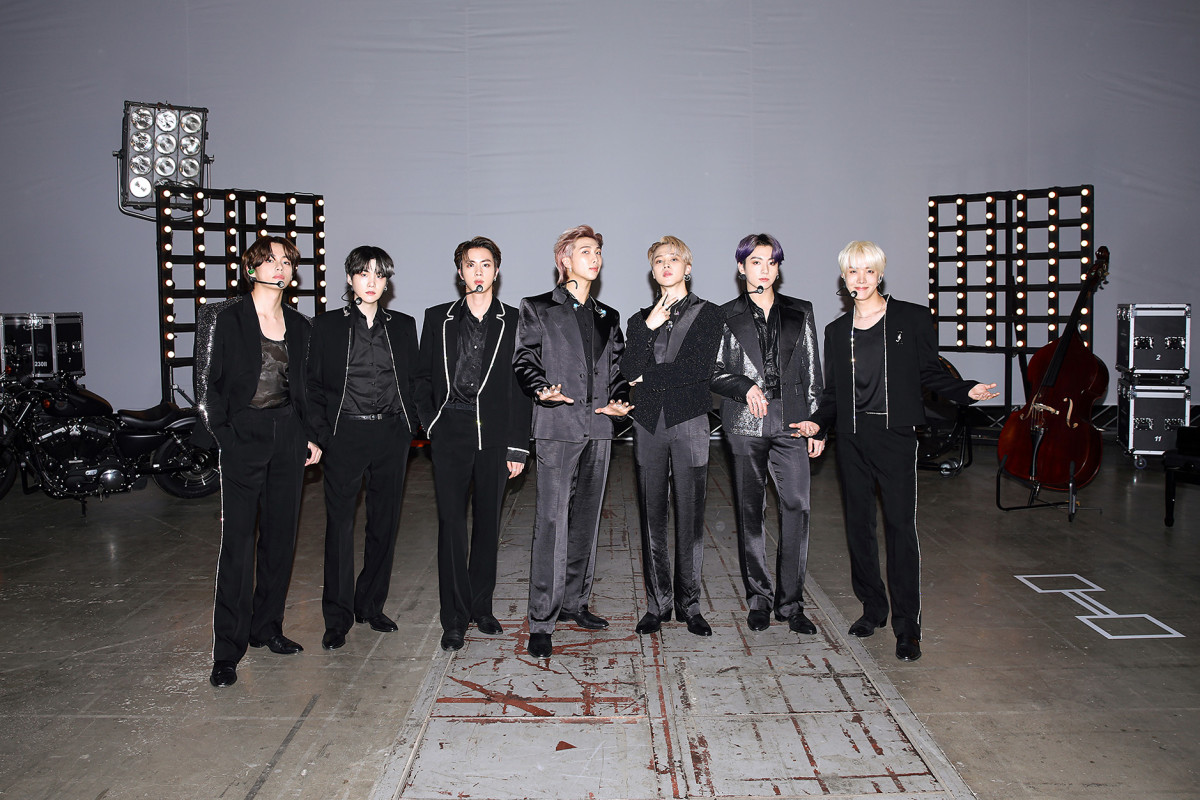 In 2020, BTS (Bangtan Sonyeondan) became the first South Korean band to make it to number one on the Billboard Hot 100 with their single, "Dynamite," beating out Cardi B and Megan Thee Stallion's "WAP," Harry Styles's "Watermelon Sugar," as well as Drake's "Laugh Now Cry Later." It was historic, as no South Korean music act had achieved such a feat — ever.

But it also wasn't unexpected, as the group had already achieved so much. This is BTS after all, the biggest boy band on record. BTS sold out world stadiums in mere minutes; shattered multiple records, including having the highest number of music video views in 24 hours for "Dynamite"; and are tied with the Beatles for most number one albums in a single year (three). For all the acclaim and adoration they've gotten, BTS has also prioritized giving back to their fans and communities: In 2020, the band silently donated $1 million to the Black Lives Matter movement, and they've partnered with UNICEF on "Love Myself," a global youth antiviolence campaign.

This deep empathy for others perhaps stems from the band's own experiences with adversity — after all, BTS was a K-pop group once considered a failure even before they debuted. During their rise, the seven members of BTS faced immense scrutiny and a range of adversities. But what makes BTS so remarkable isn't their music, flashy dance moves or dewy complexions — rather, it's their ability to connect to their audiences on a human level. Each of the members have been outspoken advocates of mental health, self-love and self-worth, as well as lending individual support to communities in need, all in a conservative country where these multilayered topics are still considered controversial.

Today, their stories and songs of resilience inspire millions of fans around the world to find the beauty in themselves and become advocates. BTS's fans — the ARMY — resonate with the group's overall message: To conquer the world, you have to love yourself first; to love others, you must confront who you are. Online and off, ARMY spreads messages of love, rallies behind political activism and donates to causes on BTS's behalf. They might be the most uplifting fandom of any musical artist in the world (in history!).

The first BTS member recruited for the group is a K-pop misfit, a rapper named Kim Namjoon (who'd later go by RM), a teen already making a name for himself on the underground hip-hop scene. He's impressive, but doesn't necessarily fit the traditional K-pop aesthetic: His skin tone is deeper, in contrast to Korea's fixation with milky complexions; his eyes are more almond in shape, without double eyelids, which goes against Korean beauty standards at the time.

All of this isn't germane to visionary producer Bang Si-Hyuk of Big Hit Entertainment, and he signs the musical genius on the spot. Bang is on a mission to dismantle the notorious corruption in the K-pop industry, inspire youth and make change in stifled South Korea. To do so, he isn't leading with what other agencies would be looking for. For him, it's not only raw talent, but empathy — young people who are on the same mission of change.

Years later, Bang and RM convince six other talented teens to join their band of misfits. They include Min Yoongi, a fellow rapper who'll later go by the name Suga (short for "shooting guard," for his love for basketball) and Jung Hoseok (J-Hope), a strong dancer who would round out the rapper lineup. The four others include the band's vocalists: Kim Seokjin (Jin), a freshman college student studying acting; Park Jimin, a modern dancer, still in high school; Kim Taehyung (who'd later go by V, for "victory"), a singer with an unusual husky voice; and Jeon Jungkook, the maknae ("youngest"), a shy but charismatic middle schooler. Together, they're the Bangtan Sonyeondan (“Bulletproof Boy Scouts”), aka BTS. The significance of the name: "to block out stereotypes, criticisms and expectations that aim on adolescents like bullets."

They move into a claustrophobic one-bedroom apartment. Eat, sleep and train K-pop, dancing and singing for twelve hours a day, balancing school on the side. All the while, they're documenting their fears, hopes and aspirations on the Twitter account that their agency launches before their debut. Interacting with fans, posting selfies and backstage videos and showcasing their personalities, they gain a small but active fan base.

When their debut finally arrives in 2013, Bang is running out of funds. The company is on the brink of going under. And it shows: When BTS hits their debut stage, some commenters suggest their look is amateur at best. With baggy outfits that awkwardly hang off their bodies, haircuts that are shaggy and eyeliner that some say is a bit too dark, they pale in comparison to other established and polished acts. But what they lack in aesthetics, they make up for with immense showmanship. For one, Jimin becomes an instant flirtatious heartthrob, playfully showing off his abs; Jungkook hits high notes with ease; RM owns the stage with his cyphers; J-Hope moves his body with fluidity; Suga slays with his rap verses; Jin's visuals send hearts aflutter; and V's overall singing and dancing make him a super-versatile stage presence.

While other bands at the time sing about unrequited love, BTS is hyperfocused on telling real stories of youth experiences. They write about complex topics, ranging from societal pressures on young people, prejudice toward the disenfranchised and the anxieties that come from growing up in South Korea. But it doesn't quite translate: Their first lead single, "No More Dream," hits the music charts at #124 and falls off quickly afterward.

Though they continue to push through with better performances, elevated outfits and makeup, they become lost in the sea of competition. Soon enough, television stations begin cutting their performances short, canceling meet-and-greets and labeling them as failures. To make matters worse, online trolls target the group's members and bully them for their appearance. Other music artists openly criticize them as well.

At a roundtable discussion on the state of hip-hop in 2013, an artist berates RM and Suga, accusing them of being fake rappers. He digs at their makeup and sense of style, questioning their sexual and gender identities and arguing that true hip-hop artists must adhere to a specific aesthetic standard. "Doesn't dressing like a girl, wearing makeup, mean you are a girl?" he asks.

The band absorbs the feedback but remains undeterred. They release their next single, "N.O," a song about the unfair and claustrophobic societal pressures on young people, which peaks at #92. They're gaining momentum, and also some attention. They star in SBS MTV's reality show "Rookie King: Channel Bangtan," and the visibility cultivates a slightly larger, robust fan base, who call themselves ARMY (Adorable Representative MC for Youth). In 2015, they find modest success and hold their first fan meeting, with over 3,000 people in attendance.

Now, two years into their debut, they shed their hip-hop aesthetic, exploring more of a softer sensibility. Less dark eyeliner, more neutral eyeshadow. Spiky hair grown out into bright, colorfully dyed locks. They continue writing songs about youth and anxiety, and begin to discuss depression openly — in spite of taboos, in spite of how stigmatizing it is for an idol group to speak about mental health.

Their third official EP, "The Most Beautiful Moment in Life Pt. I," becomes their first commercial success, with singles like "I Need U" charting in the top five in Korea and "Dope" hitting number three on Billboard's World Digital Song Sales chart. But as the band finds some success, they also become targets of renewed online vitriol. They're accused of sajaegi, a word that refers to the illegal practice of buying albums in bulk to bolster sales and manipulate the music charts. After months of investigations, BTS is finally cleared, but the experience isn't without extreme emotional turmoil and duress, not to mention embarrassment. As Bang would later lament, "We didn't even have any money if we wanted to do that." Korean fans are perplexed about how a boy band from a little-known record label outside of the Big 3 could have the audacity to succeed.

The next year, the band finally breaks through with "The Most Beautiful Moment in Life: Young Forever."

In "Not Today," from the album "You Never Walk Alone," their lyrics speak to the millions of struggling and disenfranchised South Koreans: "If you can't fly, then run. Today we will survive. If you can't run, then walk. Today we will survive. If you can't walk, then crawl." "Spring Day" hopes for a brighter tomorrow: "The morning will come again. No darkness, no season is eternal." And in "2! 3!," they sing about enduring pain: "Erase all sad memories. Hold each other's hands and smile."

In 2017, the band goes international. With almost half of Twitter now following BTS, the Billboard Music Awards celebrate them as the year's Top Social Artist, beating out mega-artists like Selena Gomez and Justin Bieber. In the live televised awards show, the seven boys walk onstage and shine, beaming to an audience full of artists they've long admired. It's not only validating, but a miracle of sorts: Just a few years ago, they were barely scraping by.

But what should have been a moment to shine became yet another instance of immense backlash — an Asian band receiving so much recognition triggers xenophobia, racism and homophobic tweets about the guys' colorful hair and makeup on a global level. But the band has prepared their entire careers to stand against hate. Channeling their superpowers of focusing on positivity and inspiration, they drop another multiplatinum album, "Love Yourself: Answer"; followed by "Map of the Soul: Persona" and "Map of the Soul: 7," which would go on to sell over 4 million copies, becoming South Korea's best-selling album ever.

In 2018, BTS is invited to speak at the UN on youth culture. Candidly, precisely, methodically, RM reads a speech that he's written himself.

"Even after making the decision to join BTS, there were a lot of hurdles," RM admits. "Some people might not believe but most people thought we were hopeless. And sometimes, I just wanted to quit. But I think I was very lucky that I didn't give it all up. And I'm sure that I — and we — will keep stumbling and falling like this. No matter who you are, where you're from, your skin color, your gender identity, just speak yourself. Find your name and find your voice by speaking yourself."

BTS is a beacon of hope. While continuing to dominate the charts, they're sending a bigger message: Love can extinguish hate. And ultimately, embracing yourself can light up the world — some would say like dynamite.