ALL YOUR NEW FAVORITE FASHION INFLUENCERS ARE DOGS 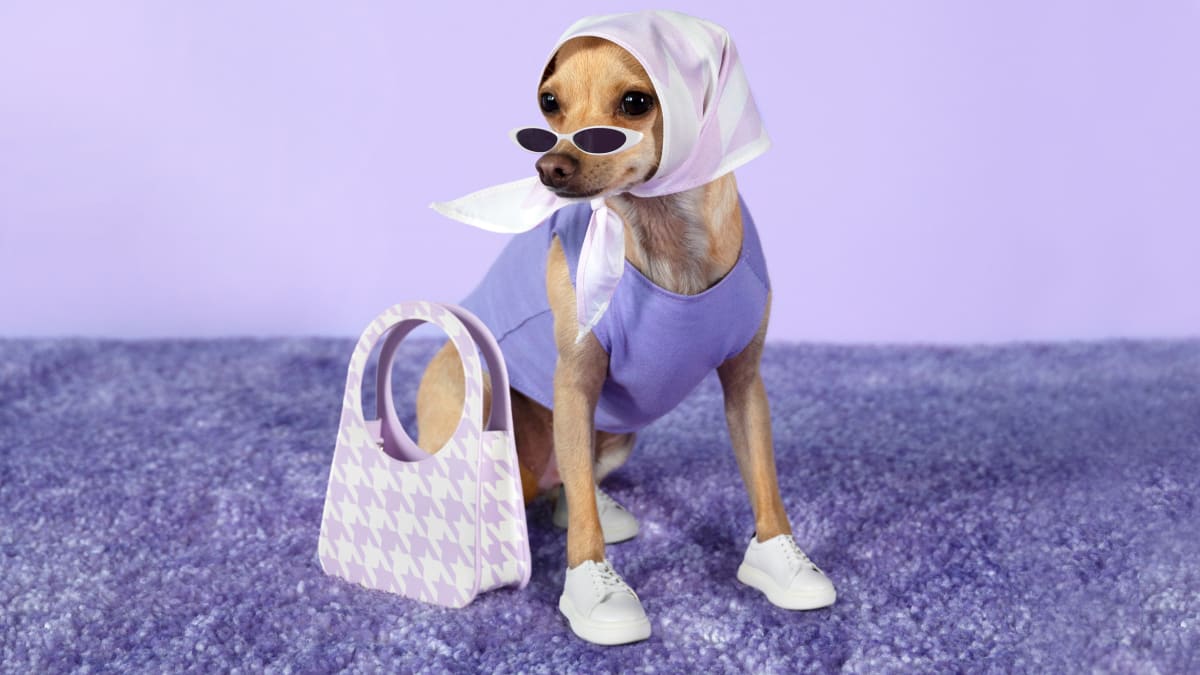 The influencer industry has grown and evolved a lot over the past decade — and so has the way we think about who qualifies as an "influencer." For many years now, it hasn't even limited to a specific species: Once a niche, pet influencers have become their own profitable sub-section of the space, with dedicated agencies, brand partnerships and devoted followings that have allowed them to shill for a variety of products, even the human kind.

Still, for a long time, within fashion, this category of influencer occupied its own lane, one that didn't cross over with the traditional blogger or content creator typically spotted at fashion week or scoring brand deals. Sure, you might see Doug the Poug on the step-and-repeat at a Target event or a designer's pet cameo on their Instagram accounts (hi, Stella), but that was about it. Now, we have Boobie Billie, Tika the Iggy, Lola Wang (fur child of Vera Wang) — each a beloved presence on social media with their own sartorial point-of-view. They all just happen to be dogs.

Loni Edwards, the founder and CEO of The Dog Agency, argues that there's been a shift within the broader perception of the market — and of pet influencers — that has allowed for this. Firstly, there are simply more options for dressing your pet. "At the beginning, it was so hard to find good fashion for your dog," she tells Fashionista. "Now, because the pet influencer space and the pet industry has evolved, you're seeing this new wave of fashion for pets."

From Edwards' point of view, the sartorial stakes for these dogs have never been higher: "It's not just a cute sweater [anymore.] They're full looks. Tika the Iggy [who The Dog Agency represents] posted the Lirika Matoshi strawberry dress. Earlier in Covid, I was like, 'This dress is amazing, I want it,' then I saw Tika wearing it. She got it before I did."

With the past year-plus spent at home (and with our screen times increasing dramatically as a result), these accounts have also been able to grow exponentially and attract new audiences. Edwards points to Tika's "Love It, Couldn't Wear It" video as an example of a viral moment that not only got people talking, but also "put an elevated spin" on dog fashion: After that, "Tika was called the new fashion 'It' girl by Vogue — it's taken on a whole new [life], coupled by other factors, like the development of the industry, the place of pets as family members and the amount we spend on them increasing every year."

Thomas Shapiro has been running the @tikatheiggy account for five years, gradually building its audience and developing its voice. However, he says fashion wasn't always its focus.

"She had a few outfits just for practical reasons, living in Canada and not having that much body fat. It stemmed from a place of practicality," Shapiro remembers. "As her online presence started growing, we started working with a few brands that do clothing just for Italian greyhounds. That's when I realized that people loved [her] fashion... It just happened."

The "Love It, Couldn't Wear It" video really took off on TikTok, a platform that Shapiro, like many others, began using more regularly during the pandemic. "In past years, we've done meet-and-greets and in-person events. We didn't get to do any of those [in 2020], so I thought, 'This is a good way to show off her outfits,'" he reasons.

When he uploaded the clip, Shapiro saw it take off almost immediately. He credits good timing and the app's algorithm picking it up and broadcasting to countless users. A similar thing happened when he cross-posted it to Instagram, he adds — since Reels had just launched, those videos were likely being pushed up on feeds.

This, combined with more product options and more eyeballs on these accounts, has allowed for a legitimization of pet influencers within the broader fashion community that didn't exist before. They're getting recognized by mainstream publications. (Tika was invited to participate in InStyle’s Golden Globe elevator photo booth, for instance.) Celebrities are recreating their videos and commenting on their posts. Brands are creating custom, dog-sized versions of their human products for them to wear on their feeds. (Boobie Billie, for one, is a Susan Alexandra gal.) They're even being paid to promote human fashion and beauty products.

Zales recently hired a handful of dog influencers — including Tika, Boobie, Lola and Maverick Dobrev (pup to actor Nina Dobrev), among others — for a campaign timed to the 10th anniversary of its Vera Wang Love bridal collection. The company wanted to commemorate this milestone with "something dramatically different, yet in line with our brand positioning around the bold statement maker," John McNamara, Signet Vice President of Marketing for the Zales Jewelers Division, tells Fashionista, via e-mail.

Zales set out to "ideate a concept that connected with our audience outside of traditional jewelry imagery," McNamara explains. Luckily, it had a canine star within the family, with Wang's dog, Lola. The result was a short-form video series, streamed on Instagram TV, that followed Lola as she finds her "Furever Love."

"We're living in a time when we could all use a bit of lighthearted entertainment, and we thought dating antics among furry friends could strike a chord – and a funny bone," McNamara writes. "Puppy love's also in full bloom right now, since many people – especially couples – have gotten dogs during the pandemic. And who doesn't love pet content on social media?"

According to Edwards, part of the appeal of dog influencers for brands is that they're "a safe space to go" in terms of campaign talent, which became an even bigger concern in 2020: "They don't say offensive things, they don't get drunk at parties — they also spread happiness and joy. When a consumer is seeing a brand associated with this thing that's bringing them light during a dark time, it's such an extreme positive. We've seen the demand for pet influencers continue to increase."

Shapiro agrees, adding that, through partnerships Tika and other dog accounts have already done, brands are realizing that pet influencers are "a really good channel to market human products."

"That's been a big shift in brands realizing that pet influencers are a really good way to connect with humans," he adds, "because at the end of the day, it's always humans on the other side of the screen. It's not actual pets."

A newer member of the community, as of late 2019, is Boobie Billie, who started posting to her account, @boobie_billie, that December. She (or, more specifically, one of the anonymous people behind the account, who speaks for and as Boobie) tells Fashionista that "fashion was always the goal" for the page: "There are all these influencers on Instagram always looking amazing, but sometimes it's hard to see yourself in them, or you're comparing yourself as humans. Here [I am] with these outfits, I figured I could make a splash in that world, too."

Since starting the account, Boobie has "worn" the likes of Susan Alexandra, Paloma Wool and Holiday the Label — brands that are beloved on Instagram, but aren't specifically for dogs. That was intentional.

The thinking, too, was that her human followers should be able to purchase whatever they saw on her account. Boobie notes that "it took brands a little while to understand how they could work with me, being a six-pound Chihuahua. Once a few of them did and I figured out how best to help them understand that they can work with me, it snowballed. Anyone who came knocking on my door knew that I could wear their shoes or their sweaters."

"I've worn every piece under the sun," she continues. "I think the more variety that I show, the more brands know that they can actually work with me, and the bigger brands are less afraid to be like, 'Oh yeah, I can partner with a Chihuahua.'"

Boobie has taken this idea a step further by launching her own brand of human fashion accessories, called Boobie World, in September. "When I launched my Instagram, I knew eventually I wanted to launch something, it just wasn't really clear what I wanted to launch," she says. "I figured, instead of just sitting around waiting for the perfect idea to blossom and then putting all the steps in place to make it happen, I would start by putting my point of view out there and seeing if there was even a want for it. When the idea of Boobie World really came to life was when I realized that people actually do like my point of view on fashion and that can be enough."

Because she was already wearing human brands pretty much exclusively, it didn't feel like that much of a leap to have her brand be for humans, Boobie argues: "It was a natural step to go from wearing your favorite brand to making your favorite brand... I wanted it to be very clear [that I was] making a legitimate label for humans, not [an influencer line] or something for dogs. There's lots of fun that can come out of Boobie World. I have hundreds of thousands of human followers that love my outfits, and I wanted to make sure I made something for my bbs."

Even as she aims to make her own mark on the industry with Boobie World, Boobie still has certain goals for herself as a content creator. "I do really love my smaller brands, but I think a big moment for me and my account would be to do a wild partnership — I want to be in a MyCalvins ad," she says. "A lot of the fun brands that don't take themselves too seriously are embracing the idea that they can work with me, but I do want to have a moment that really legitimizes a dog as a model."

Tika has already worked with some pretty big names within the industry, but Shapiro is hoping that there's more to come once the world opens up, post-pandemic. "Maybe Tika can go to a few fashion shows and sit front row," he suggests. (A dream brand to work with would be Valentino or Dior, he notes.) "I used to joke that I wanted to see on Tika on the runway, but you know what? She'd be more of a front-row type girl."

Boobie adds: "Obviously, I can't tell the future, but I think the more stuff that comes out from a dog influencer that's taken seriously — the more and more levels of fashion we can kind of get through — the more fun this will become. For me, it's all about seeing how far a dog can get within this world. Can I walk on the runway? Maybe, who knows? How far can we take this idea that a dog can do anything? Time will tell, but I think I can do it."