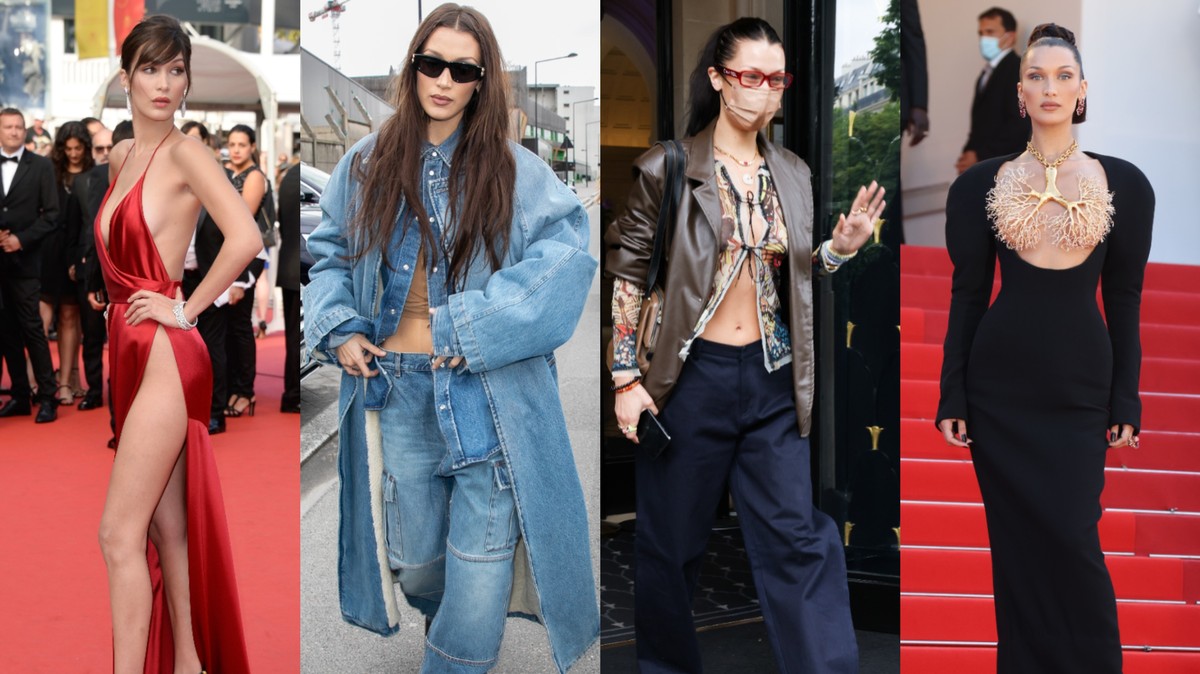 It seems that Bella Hadid sets the internet ablaze with every outfit she wears. Since signing with IMG Models in 2014 — and debuting on the Tom Ford runway a year later — the supermodel has both captured and defined the zeitgeist with her ever-evolving personal style. Throughout her career she’s been muse to designers from Jacquemus to Mugler’s Casey Cadwallader, the studied subject of Instagram style accounts and one of the world’s most-photographed women both on and off the pages of fashion magazines. She’s the undisputed queen of the Cannes red carpet — and the entire naked dress genre, for that matter. One immaculately styled outfit, or perfectly placed accessory, when worn by Bella, can launch a trend (2016’s denim craze and 2018’s micro-sunglasses) or reboot a dormant one (the Dior Saddle bag), boost the profiles of emerging designers (Nensi Dojaka, Charlotte Knowles, Supriya Lele), and nearly break the internet (her Schiaparelli Cannes moment.)

Despite the fact that her career is just getting started, Bella Hadid’s style has undergone a complete transformation since her 2014 debut, dipping in and out of trends, and weaving through fully-realized “eras” that have defined Bella’s style over the years. From gothic leather in 2016 and 2018’s streetwear tailoring, to 2020’s workwear looks and the pandemic’s DIY aesthetic, we take a look back at how the super has — and continues — to define and redefine fashion today. This is Bella Hadid’s style evolution.

At a Calvin Klein launch party with Gigi Hadid, 2014

Before moving to New York City and becoming a model, Bella was known primarily for her guest appearances on The Real Housewives of Beverly Hills, where she shared the screen with her mother (and Real Housewife) Yolanda and big sis (and model) Gigi. During this era, Bella attended myriad fashion industry events alongside Gigi, wearing a series of sophisticated — and very safe — tailored looks. Think simple pencil dresses, all-black everything, pointed toe pumps, fitted blazers, tasteful leopard print and sleek jumpsuits, like the one seen here. Bella even stuck to this formula for her first-ever Met Gala look, a black embroidered sheath dress worn to the event’s 2015 edition. While these looks are a far cry from the risk-taking, trend-setting fare Bella’s known for today, they’re perfect for a fledgling model dipping her toe in the fashion industry pond.

A year after moving to NYC — originally to attend Parsons — and signing with IMG Models, Bella made her runway debut at Tom Ford’s AW15 show. In the year that followed, Bella stuck to the era’s standard model-off-duty uniform: tried-and-true basics like skinny jeans, turtleneck sweaters and bodysuits, leather leggings, hoodies and sweatpants, and leather miniskirts. All paired with either pointy black boots or simple trainers.

Bella returned to Paris Fashion Week for her third season with a stacked line-up of blue chip shows (Chanel, Givenchy and Miu Miu) and a wardrobe to match. This time around, the seasoned model took a more fashion-forward — and subtly goth — approach to the model-off-duty uniform: faux-fur jackets, sheer hoodies, bralette tops, diamanté chokers, studded leather jackets and bootcut (rather than skinny) jeans. Here, she exits Chanel wearing the era’s quintessential Unravel leather pants with a baby tee and moto jacket. Missing are her signature sunglasses — essential for blocking out the paparazzi’s camera flash. During this era, Bella preferred big and round shades or simple aviators.

Bella’s new model-off-duty look — a bit sexy, a bit goth-y — translated into her red carpet wardrobe too. Out were the tailored mid-length dresses and jumpsuits, and in were the draped gowns, plunging necklines and thigh-high slits — all in black, of course. This daring Alexandre Vauthier couture dress, worn to the 2016 Grammy Awards, was Bella’s first major red carpet moment. And while this slinky number wasn’t exactly a naked dress, it did give us a glimpse into the headline-making, internet-breaking red carpet looks that would become Bella’s calling card in years to come.

And speaking of headline-grabbing looks: this red Alexandre Vauthier couture gown, worn to the 2016 Cannes Film Festival, was Bella’s first truly viral red carpet moment. Harper’s Bazaar called it the sexiest dress at the year’s festival. Huffington Post took it a step further with “the sexiest dress of all time.” And Vanity Fair referred to the ensemble as “that red dress”, the use of italicized determiner cementing its status among iconic dresses like J.Lo’s plunging Versace number. With its slinky halter bodice and waist-high slit, the look was a veritable naked dress — the first of many. It also marked a departure from Bella’s favoured goth-y style towards a more glamorous look.

If the first half of 2016 was all about black leather, then the latter half was wholly dedicated to denim. No longer sporting the skinny jeans of yore, Bella took a more polished, fashion-forward approach to the beloved blue fabric, wearing covetable pieces like the year’s ubiquitous Re/Done miniskirt and Frame denim jumpsuit, cut-off denim jackets and oversized Canadian tuxedos. Here, taking a break in Paris during her fourth runway season, she wears a denim bandage skirt and matching jacket over a sheer mesh top — an underlayer that’s still a staple in Bella’s wardrobe today.

By 2017, Bella had done naked dresses before (see: 2016 Cannes and the 2017 Met Gala) but never like this! To the year’s Cannes Film Festival, Bella one-upped the previous year’s red Vauthier look with an entirely sheer, crystal-embellished Ralph & Russo gown. It was, obviously, “the sexiest dress to ever hit Cannes.” Featuring a corseted bodice and chiffon panels dripping with sequins, chains and crystal, the custom-gown was handcrafted for the supermodel over the course of 3000 hours. In the years that followed this headline-making Ralph & Russo moment, these kinds of near-sheer, lingerie-leaning gowns became Bella’s red carpet go-to. Think this Dior underpinnings look, this slinky Julien MacDonald number and this nude Mugler catsuit.