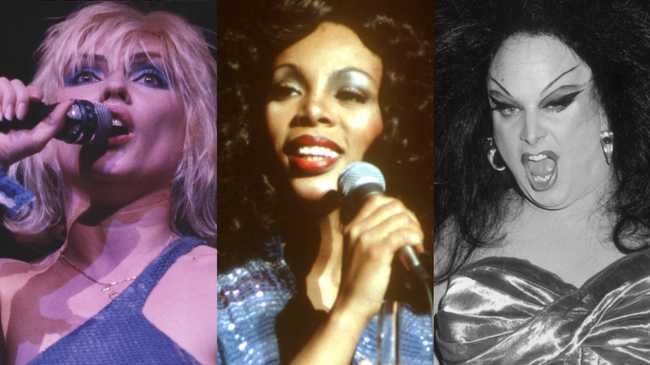 Fuelled by Quaaludes and cocaine, a generation of artists, performers, and partygoers sated their hunger for the dancefloor under the flashing lights of clubs like Paradise Garage and Studio 54. Short-lived and widely criticized for its mechanical sound and outlandish pageantry, the disco era—with its high-gloss mirrorball aesthetic—has left an indelible mark on the face of pop culture.

Like all major beauty moments, disco was informed by the social and political world around it: against the backdrop of the civil rights movement, alongside the sexual revolution and Vietnam War, and hot on the trail of Stonewall. While its origins had been bubbling under the surface for some time, disco finally got its due in 1974, when Billboard debuted its American disco chart with Gloria Gaynor’s “Never Can Say Goodbye” as its first number one hit. Black artists dominated the charts, and at a time when New York still prohibited same sex male dance partners, the significance of disco’s communal bump and grind was not lost on the queer community.

The movement celebrated inclusivity, sexuality, glamour and adrenaline in equal measures. From the voluminous blowouts and the blush-contoured cheeks, to the ever-present blue eyeshadow, we’re looking back at the era’s most defining beauty looks.

The year is 1973. A 29-year-old Diana Ross visits London to promote the release of her latest album. Earlier that year, Ross received an Oscar nod for her role as Billie Holiday in Lady Sings the Blues. The film, inspired by Holiday’s biography, follows the artist’s life through the 1930s and 40s, with the costume and makeup to prove it. It was just one in a handful of period pieces that fuelled a sense of nostalgia for the 1920s, 30s and 40s.

Sure, Ross’ bouncy long bob may be a nod to a flirtier sixties trend. But her feathered false lashes and wash of blue-gray shadow serve to bridge the gap between go-go and disco. Fresh but not juvenile. Ethereal but not otherworldly. Doll-like with subtle highlights of the uncanny. And of course, the beginnings of what would become the era’s characteristically gaunt throwback brow.

If you’ve seen even one John Waters film, then you’ve probably seen Divine. An American actor, singer and drag icon, Divine’s platinum hair and cut-crease cat-eye grace the big screen in cult titles like Pink Flamingos and Hairspray. Divine’s expressive angular brows and negative-space cupid’s bow personified the exuberance of disco beauty: a face animated by artifice, designed for the drama of an audience. Divine died in 1988, but her iconic disco look lives on as the official design inspiration for the Ursula character in Disney’s Little Mermaid. Unexpected? Totally. But a worthy testament to disco’s enduring influence nonetheless.

You may know her as Donna Summer. You may know her as the Queen of Disco. Either way, you know her. When this photo was taken during a live performance in 1977, American singer, songwriter and actor Donna Summer was nothing if not a household name. With a rapid fire of hits including “I Feel Love”, “Love to Love You Baby”, “Bad Girls”, and “Last Dance”, Summer’s voice and glam persona became a disco fixture.

As undisputed royalty, it’s no wonder that Summer’s stage makeup accounts for some of the most iconic beauty looks in disco history. As her career evolved, so too did her approach to makeup. From barefaced and doe-eyed with full brows in 1976, Summer found her home in more pigmented lids and angular blusher. But while her celebrity grew, her eyebrowsshrank. Here, Summer’s look is punctuated by a pair of otherworldly fine-point brows inspired by the disco era’s nostalgia for a 1930s aesthetic. Lucky for Summer and her contemporaries, less hair meant more lid—and not an inch of canvas was wasted.

We can’t talk about disco beauty without mentioning Blondie frontwoman and blue eyeshadow enthusiast, Debbie Harry. Originally dubbed Angel and the Snake, even the name Blondie had its origins in 70s beauty. Unsurprisingly, it all started with Harry’s legendary peroxide bleach job. According to Harry, the band’s name was inspired by the catcalls she received after dyeing her hair.

By the time this photo was taken in 1978, Harry was already known as someone who doesn’t shy away from a bold look. Dense pigments and heavy-handed application made this look daring and subversive in a decade of same-same blue lids and magenta cheeks. The disharmony of clashing tones is downright clownish, but somehow also hypnotically chic? Imperfect by design, even the application lends itself to the essence of a sweaty nightclub with its artificial light reflecting in all the right places.

Watts-born, San Francisco-based Sylvester James Jr. was a singer-songwriter and countercultural icon. Getting his start as a performer in the experimental drag ensemble, the Cockettes, Sylvester continued to challenge societal norms with his androgynous approach to beauty and fashion. An openly gay Black man enmeshed in the queer community, he found mainstream success in the glitz and glamour of disco.

Sylvester was a true beauty chameleon. Whether he was conforming to gender norms or confronting them, he (like all of disco’s most enduring faces), understood the power of blue eyeshadow. Throughout his many variations on the disco beauty theme, one thing remained consistent: for all of his smokey eyes and glossy lids, Sylvester adamantly rejected the media’s efforts to pigeonhole him. “I’m not a drag queen,” he told Joan Rivers in 1986. “I’m Sylvester.” It was that sense of holistic and unapologetic maximalism—a cocktail of anything and everything; an amalgam of old, new, and imagined—that inspired disco’s legendary beauty looks.